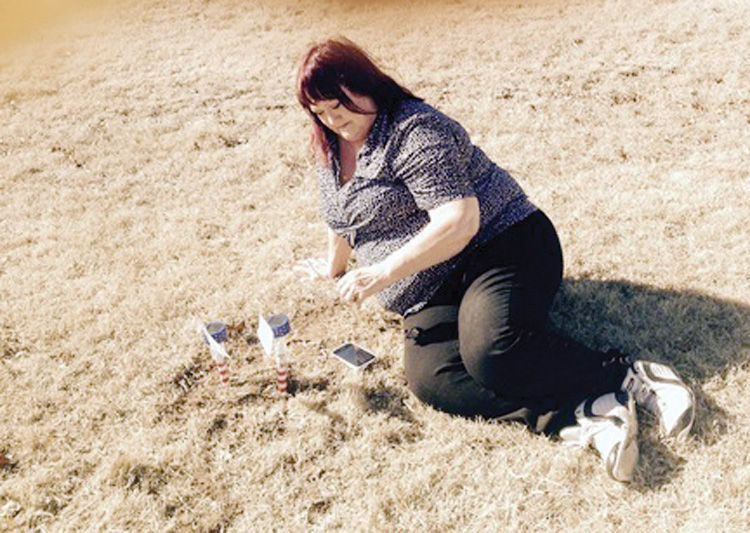 After nearly 66 years, it was the first time McMillan had visited the grave of the woman who gave birth to her.

“My Momma had me in the old Woodward Hospital in 1948 and died giving birth to me,” she said. “My dad said he went to the hospital to pick me and her up and he went to her room and she was laying there covered in blood – she had hemorrhaged to death.”

That meant her father, Dempsey Eli McMillan, now had six children, including a one year old, a two year old and now an infant to care for on his own, McMillan said.

“There was a nurse there, that when my dad held me, came up to him and said she was well financially fixed, she did not have to work and if he would let her take me, then I  would not want for anything,” McMillan said. “My dad thanked her, but said there was no way he could give up his family.”

According to McMillan, needing help with his large family and no wife, he loaded everyone up and headed to his hometown of Henryetta.

McMillan’s father never remarried and as far as she knows, never returned to Woodward.

“Yep, he died when he was 73 years old and just never wanted another woman over his kids,” she said. “He was the best daddy in the whole world.”

With the help of her older sisters, Mary Jane and Clara, ages 7 and 5 when she was born, her father was able to care for his family and still work full time in the coal mines.

“I still remember Mary Jane helping my dad cook – he made the best biscuits ever,” McMillan said. “You see, we were pretty poor and my sisters didn’t have no baby dolls, they had real babies to care for.”

In all those years, with a house full of children to raise, McMillan said they were never brought back to Woodward , where her mother’s grave remained unmarked.

“I always knew she was buried somewhere in Woodward,” she said. “I just really didn’t know where.”

When some of her grandchildren were passing through the region, they stopped by Elmwood Cemetery and began looking for her grave. Finally, with help from the cemetery’s staff, they found it.

That was when McMillan decided it was time to come to Woodward and finally pay her respects to the mother she never met.

Finally, the pair made their way to the cemetery with an offering, the first of its kind for Nina May McMillan: a marker for her grave.

“We went to Sam’s Monument and got a marker for it now,” she said. “So now we will always know where she is.”