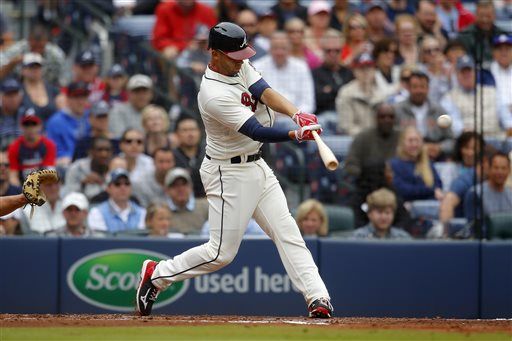 ATLANTA (AP) — Alex Wood had enough problems against the Mets without giving up Bartolo Colon’s first RBI in a decade.

Wood and reliever Juan Jaime combined for six walks as the Braves’ perfect start ended Sunday with a 4-3 loss to Colon and the Mets.

The low point may have come in the fourth, when Colon punched a single into shallow right field to drive in a run.

“Just a fastball,” Wood said, adding Colon “just wailed at a fastball and broke his bat and hit a bloop.”

Wood gave up three runs, eight hits and three walks in 6 2-3 innings as the Braves fell to 5-1.

“He battles. He competes,” said Braves manager Fredi Gonzalez. “Today he didn’t have his good stuff until the last couple innings.”

Michael Cuddyer’s two-run homer off Wood in the first inning put the Mets ahead. Andrelton Simmons answered with a two-run triple in the second.

Colon (2-0) lost his batting helmet and broke his bat when he punched the single into shallow right field to drive in Wilmer Flores from third base. With his helmet left behind in the batter’s box, the 41-year-old Colon grinned as he stood on first base following his first RBI since June 10, 2005, for the Los Angeles Angels against the Mets.

Jeurys Familia got two outs for his first save. Closer Jenrry Mejia, already on the disabled list, was suspended for 80 games Saturday following a positive test for the steroid Stanozolol.

Collins let Jerry Blevins get the first out in the ninth before turning the game over to Familia, who struck out Gomes and ended the game on Phil Gosselin’s flyout.

Braves: LHP Mike Minor, on the 15-day DL with left shoulder soreness, had more discomfort while attempting to intensify his throwing program in Florida. He returned to Atlanta to be examined by team doctors and will be closely monitored as he tries to restart his throwing program.

Mets: Collins is expecting RHP Jacob DeGrom to have a memorable start against the Phillies in Monday’s home opener. “I think it’s something he should remember for a long time,” Collins said. DeGrom allowed two runs in six innings in a 2-1 loss to the Nationals on Wednesday. RHP Aaron Harang (1-0) is scheduled to start for the Phillies.

Braves: RHP Shelby Miller, who received no decision while throwing five scoreless innings in Atlanta’s 2-0 win in the third game of an opening, three-game sweep at Miami, will face the Marlins for the second time in six days in Monday night’s series opener. Mat Latos will start for Miami.