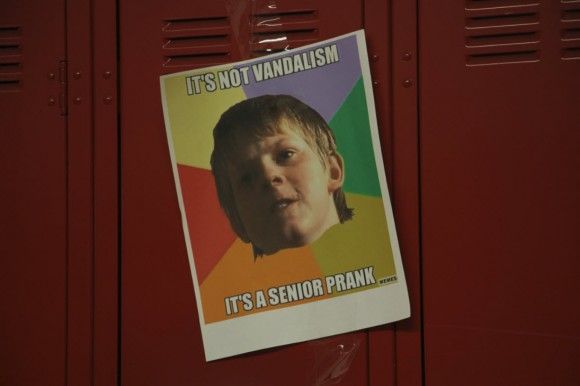 “It’s not vandalism,” read the flyer taped to a locker early last week in the still sticky, smelly, and unsanitary halls of Roswell High School. “It’s a senior prank.”
School administrators and, more importantly, the Roswell Police Department begged to differ.
Roswell is just one of dozens of schools across the country where traditional end-of-the-school-year shenanigans are crossing the legal line from harmless prank (like putting your school up for sale for $20.15 million—with your principal’s permission) to full-blown criminal mischief, earning some members of the Class of ’15 criminal records before they even earn their degrees.
Here are some of the outrageous senior pranks that have made headlines this month.
1. Students say Roswell, New Mexico High School was sticky for days after a large group of seniors spent hours decking the halls with maple syrup. And cow manure. And toilet paper. And paintballs. Police responding to the alarm set off at the school early Monday morning arrested the perpetrators, some of whom were well-respected student leaders, after a short chase.

2. It was supposed to be just some glitter, some balloons, maybe some toilet paper. It wound up being hay, trash, urine, chickens, and at least one dead possum. And that was just the stuff on the floor.

Seniors at Sequoyah High School in Madisonville, Tennessee also covered the school’s walls with baby oil and ketchup during a senior prank that quickly escalated into a near riot that saw not only the destruction of school property but theft. Now 100 of them have been banned from graduation ceremonies and at least one school employee has been fired for helping the students gain access to the school building.
3. Teachers at Chopticon High School in Morganza, Maryland were bugging out last week after a senior prank left their hallowed halls swarming with 72,000 lady bugs. According to the St. Mary’s County Sheriff’s office, five students donned masks, and forced their way inside the school to release the Coccinellidae, which they purchased off the Internet. Four of the suspects were charged with 4th degree burglary, destruction of property, and disruption of school activities.

4. Everyone had been hearing it might be a water balloon fight. It wasn’t. Instead, a group of seniors at Holt High School in Wentzville, Missouri dug up three trees that had been in the school’s cafeteria for more than 30 years.

An ongoing investigation into the incident has so far yielded ten arrests.

5. It wasn’t tossing old school papers all over the parking lot that got seniors at Centennial High in Champaign, Ill. in trouble. It was how they parked. At least 30 cars were parked horizontally across multiple parking spaces in senior parking lot on the last day of school. But this time school officials didn’t call the police, they called the towing company. All but three students eventually parked correctly after the “move it or lose it” announcement went out over the intercom. The three that didn’t made Reynold’s Towing an easy $480.
6. In Cherokee County, Georgia, it’s not pranks that are getting seniors in hot water these day—it’s suburban warfare. Rather than target their alma mater at the end of the year, students participating in CreekView High School’s annual “Junior-Senior War” target each others homes, and not just with toilet paper. A barrage of frozen paintballs shattered windows out of one house, and one family’s yard was littered with human waste and dead animals. Police say those responsible could face criminal prosecution.
7. In Prescott Valley, Arizona., it wasn’t a school that was vandalized in a senior prank, but school buses. Police say four students disabled 66 school buses in the Humboldt Unified School District fleet by deflating the tires of the vehicles and removing their valve stems.