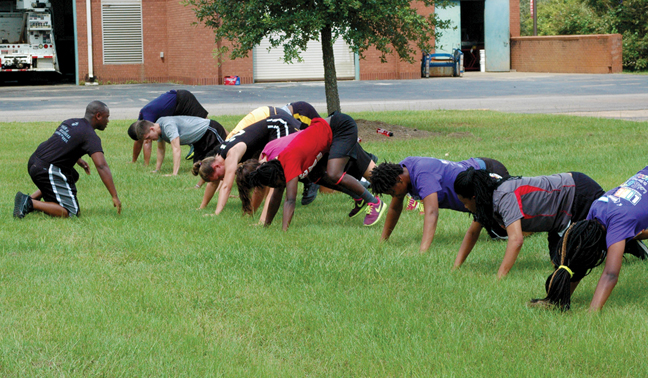 Marine Sergeant Perkins is shown above (left) putting the Lady Jets through some pre-conditioning exercises to help them get in shape for the 2015-16 season.

AMERICUS – South Georgia Technical College’s Lady Jets are taking advantage of a local Marine Corps drill sergeant’s tactics to help prepare the team for the upcoming 2015-16 basketball season.
Sgt. Delrico Perkins, with the Marine office in Americus, worked with the Lady Jets as part of their pre-season conditioning drills in 2014 and after the success of the squad last season, South Georgia Technical College Athletic Director and Lady Jets head coach, James Frey, asked Sgt. Perkins to come back again this year.
The Lady Jets felt that Sgt. Perkins was a big part of their success last season. He showed the team how to keep pushing physically even when they felt they could not continue. Not only did he provide physical conditioning, he also helped with the mental conditioning for the young team.
The Lady Jets finished the 2014-15 with a 29-8 record, the second best in the team’s history, and earned their second consecutive trip to the National Junior College Athletic Association (NJCAA) tournament. They did all of that with eight freshmen and only three returning players from a team that posted the best record in the history of the Jet and Lady Jets with 30 wins.
Sgt. Perkins was able to come out and be with the Lady Jets when they won the District J championship game last season which earned them the right to advance to the NJCAA national tournament.
This season, he is working with the Lady Jets on Tuesday afternoons and puts the basketball players through some exercises similar to those that marines enjoy in basic training or boot camp. The drills that he runs are designed to get them in shape mentally and physically for the upcoming season.
Last season, the Lady Jets finished second in the Georgia Collegiate Athletic Association (GCAA) regular season and captured their second consecutive NJCAA Region XVII tournament championship, second NJCAA District J tournament title, and earned the second consecutive trip to the NJCAA National Tournament in Salina, Kansas. The Lady Jets were seeded 17th in the nation in the NJCAA national tournament and finished in the top 16 in the nation.
Lady Jets head coach James Frey and Assistant Coach Kenzia Conyers are hoping that Sgt. Perkins will have the same positive impact on their squad this year as he did last year.