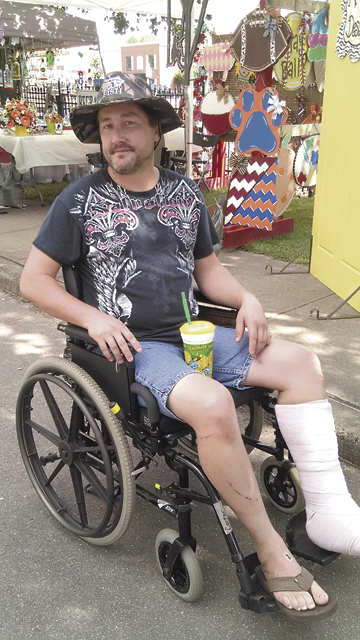 PLAINS — In this tiny, tiny town the ambiance of family fun flowed through all the corners of the big festival area Saturday. Celebrating 19 years, the Plains Peanut Festival kicked off under a brilliant blue sky. The first day for many without raindrops falling on their heads, people from all over Georgia overtook the town for a day of crafts, food, music and fun.
For many, like Monica Andrews of Americus, the festival is an annual ritual, something not to be missed.
“We just came out to see the sights, see what is here, and have a good time,” she said.
Friends sat gathered together in Maxine Reese Park to listen to familiar gospel tunes. As they clapped in time to the rhythm of the old country hymns, they called out to those passing. Many were strangers, but they were all friends on this day, the gaiety of the event bringing out the brotherly love in heaping spoonfuls.
The main attraction for the majority of the day were the craft and food vendors lining the streets of the downtown area. Colorful, eye-catching wreaths of the football fan variety were popular items. Vendors displaying for sale  photos of pana-graphed ocean scenes, ornate jewelry, swirly ballerina dresses in bright pinks and greens, and lo and behold, a few friendly snakes and turtles.
The Georgia Reptile Society, a state-wide educational conservation outreach program, brought along a collection of creatures to educate the public. Jack Moody, a volunteer with the organization founded in 2012, said this was their third year attending the festival as a vendor.
“We come out to talk with the people, to educate them on reptiles they may have seen before, but never got a chance to interact with,” he said. Moody said being able to attend the Peanut Festival has been, “overall, a pretty cool experience”. Would he continue to participate in the Plains Peanut Festival? “Most definitely, we always have a great experience when we come to Plains,” he said.
“Hey, come here! You gotta see this!” a teenager yelled across the park to a group of friends. The “this” turned out to be large, clear plastic inflated cylinders, balanced on a pool of water. Inside these large cylinders were youngsters attempting to roll and flip, and managing mostly only to tumble, fall and laugh uncontrollably. Aside from the rolling hamster balls, there were other fun amusements for children and youth, and while the lines were long, the squeals of laughter proved it worth the wait.
Other events at the festival made for a full day of being out on the town. From the early morning hours of vendors , 5K road race, the Carters’ annual book signings, the Peanut Festival Parade and the SAM Shortline Excursion train, there was more than enough for everyone to enjoy the day. The event wrapped up with a dance on Main Street featuring local talent Luke Martin.
Deborah Music of Lumpkin said her favorite part of the festival was the gospel singing and other music throughout the event. This being her third year to attend the event, she said more than anything, it was the family atmosphere that has kept her coming back.
“It’s very family oriented,” she said. “There are a lot of people here you haven’t seen in years. There are a lot of old memories that you have coming back here year after year, and that is what I enjoy the most. Sitting here, watching the people go by. It’s like coming home.”
The day would not be complete without a taste of a signature favorite, peanut ice cream. The smells of the festival’s food vendors filled the entire Main Street area, and the variety was plentiful and tempting. Boiled peanuts were, of course a fan favorite, as well as the blooming onions. For many of the festival attendees, it was all about the food, saying they appreciated a great Philly cheese steak, or an expertly cooked Polish sausage. Terri Hood of Columbus said she appreciated the wide variety of edible fare as well. Attending for the second year in a row, she said it is the music and family gathering that brought her back.
“It’s family fun, a friendly laid back easy kind of fun,” she said. “But the fried pickles, well they are just salty deliciousness,” she said.
So much to do, so much to see, the sights and sounds of the Plains Peanut Festival have grown familiar to many, with new elements added each year. Many come for specific events, to run in the race, to see  President Jimmy and Rosalynn Carter, to ride the train, or just enjoy the music. However, for nearly everyone, they spoke first about family and second about coming home. The sense of family is alive at the Plains Peanut Festival, enduring for nearly two decades, because there is always a little something in everyone that needs to come home.