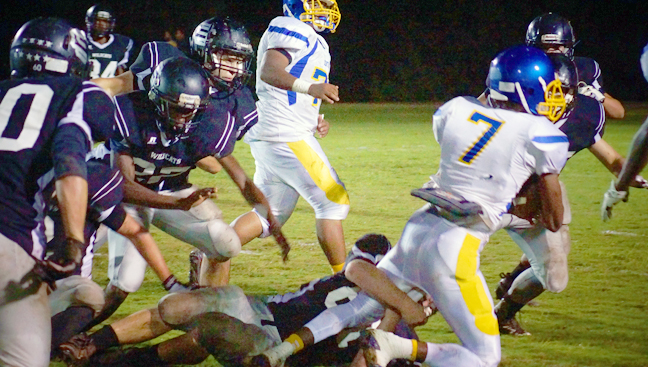 Photo by Tammy Satterfield: Jake Hall makes a tackle for the Wildcats during the school's homecoming match against Central on October 2.

By JACK PEAVY
and MICHAEL MURRAY

ELLAVILLE – The Wildcats stormed onto the football field in Ellaville on Oct. 2 to take on the Central High Hawks in Schley County’s homecoming match.
Wet playing conditions and continuous rain throughout the match forced the game to be played as an old fashioned, gritty defensive grind, with many of each team’s drives resulting in three and outs.
The low scoring affair in dreary weather led to sloppy turnovers and stellar defensive play from both sides. On the offensive side of the ball, the first half of the match was highlighted by an exciting diving catch by senior, Glenn Pilcher, that netted the team 22 yards.
Late in the third quarter, the Hawks managed to grind and pound their way across the muddy field with a series of short runs that landed them deep in Schley’s red zone.
From there, a successful one-yard run put the only touchdown of the game on the board for the visitors. Central went for the two-point conversion, running an option that the team’s quarterback sneaked past the goal line to bring the game’s final score to 8-0.
The Wildcats return to action on Oct. 9, facing the St. Anne-Pacelli Vikings in Columbus. In the team’s last five meetings, the Wildcats have one two and lost two. The teams’ 2012 mach ended in a 0-0 tie.
They will return to their home field on Oct. 16 to battle the Dooly County Bobcats. The Wildcats won last year’s test against Dooly County 26-21.