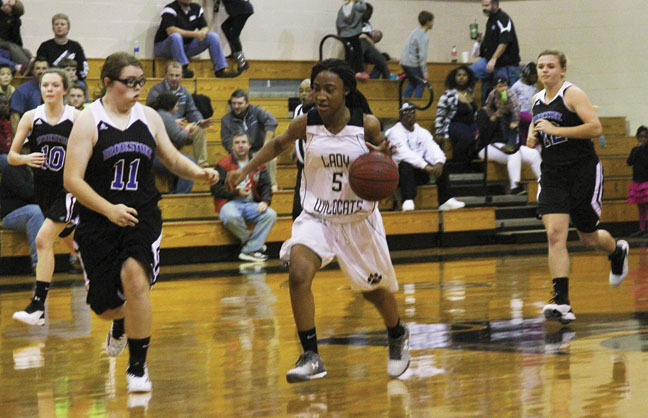 Michael Murray/Americus Times-Recorder: Chelsey Carter dribbles past a Brookstone opponent during the Lady Wildcats’ Dec. 4 match in Ellaville. Carter led the team with 13 points in that contest. 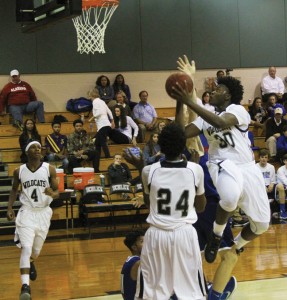 Michael Murray/Americus Times-Recorder:
Jamarcus Scott takes a shot from the lane during the Wildcats’ Dec. 4 match in Ellaville.

ELLAVILLE – The Wildcats and Lady Wildcats brought some tough competition to their home basketball court on Dec. 4 in Ellaville, with both teams facing region opponents, Brookstone.
The Lady Wildcats opened up the action that evening, clawing their way back from an 11-point deficit in the fourth quarter to take the lead over the Lady Cougars with four minutes let on the clock. Both teams continued pushing forward and, unfortunately for Schley fans, a Brookstone shooter sank a lay-up at the 20-second mark to secure the 37-35 victory for the visiting team. Schley’s girls returned to the court the next afternoon to dish out a 44-42 defeat to the Dooly County Lady Bobcats.
The boys’ game got off to a similar start when the nightcap kicked off on Dec. 4, as the Cougars amassed a six-point lead over the Wildcats in the second quarter. Schley’s boys fought their way back to snag a 48-44 win. The next afternoon, the Wildcats returned to the court to be bested by the Dooly County Bobcats 77-53.
In the girls’ Dec. 4 game, Brookstone point guard, Naeisha McClain, proved to be a thorn in the Lady Wildcats’ side through the entire 32 minutes of play. McClain accounted or the majority of Brookstone’s points throughout the match and contributed greatly to the Lady Cougars’ early lead.
The Lady Wildcats entered the final frame of the match deep in an 11-point hole, with Brookstone up 26-15. To kick off the fourth quarter, Schley sophomore, Chelsey Carter, grabbed an offensive rebound and laid it up, sparking a 15-4 run for the Lady Wildcats that left the score tied 30-30 at the four minute mark. Carter contributed eight points to the comeback run, while the team’s only senior, MaReshia Brooks drained a pair of three-pointers to add six more. Bethany Phillips assisted Carter in one of her lay-ups.
With just under four minutes left to play, Carter managed to draw a pair of fouls and add four points from the charity stripe to take the lead 34-32. Brookstone responded with a foul shot and a lay-up to grab the advantage near the 1:00 mark and Carter equalized the score with a 42nd-second free throw. When the clock wound down to only 25 seconds, Brookstone’s McClain struck one final time with a lay-up to propel the Lady Cougars to the narrow 37-35 win.
All told, the Lady Wildcats staged a very exciting comeback that nearly landed them on top.
Carter paced the Lady Wildcats, contributing 13 points, five rebounds, and four steals to the match. Brooks followed close behind with eight points and four rebounds. Bethany Phillips added seven points, four rebounds, and five steals, while Emily Campbell tossed in five points and grabbed five rebounds. Ashton Satterfield rounded out the scoring with two points and seven rebounds.
When the Lady Wildcats returned to the court on Dec. 5 to take on Dooly County, the girls rode an impressive shooting streak by Phillips to a 44-42 region win. Phillips was on fire during the match as she tossed in 21 points to push the Lady Wildcats to victory. Phillips also contributed three rebounds, two steals, and five assists to the victory.
Carter narrowly missed a double double in the match, tossing in nine points and bringing down ten rebounds. Carter also gained six steals. Brooks added six points, while Campbell and Satterfield each tacked on three. Satterfield’s rebounding skills proved useful in the match as she brought down 13 and gained two assists. Campbell was instrumental in the victory as well, adding nine rebounds, three steals, and three assists to the win. Kelli Rees rounded out the scoring with two points.
The boys hit the court on Dec. 4 with Calvin Sims, Christian Arnett, Marquell Sims, Tyree Hawkins, and Jamarcus Scott starting for the Wildcats.
Scott jumped for the tip-off before Brookstone received first possession and opened the scoring one minute in with a pair of free throws.
The Cougars added a three-pointer before Scott put the Wildcats on the board with a lay-up and a free throw. C. Sims expertly dialed in from beyond the arc to give the Wildcats three more before Scott tied the score 9-9 with a lay-up and a free shot.
The Wildcats took their first lead of the game less than a minute later, when Scott brought down his own rebound and put it back up to boost the score to 11-9.
The home crowd wouldn’t celebrate for long, however, as Brookstone responded with another trey to retake the advantage. The Cougars continued to pull ahead, building a six-point cushion before a long shot from M. Sims broke the Wildcats’ silence. Scott added a free throw and a lay-up, coupled with another C. Sims three-pointer and free throw that left the Wildcats looking at a 25-20 deficit at half-time.
As the scoring continued, four minutes into the third frame, Arnett tied the score 27-27 with a jumper from the lane. Hawkins then added another lay-up to put the Wildcats ahead. Brookstone tied the score once more at the 2:10 mark, but the Wildcats did not relent and took a 36-32 lead into the final stanza.
Brookstone opened the final frame with a pair of lay-ups to tie the score 36-36.
With seven minutes left to play, it was still anybody’s game, however, and the Wildcats put their skills to the test, matching Brookstone point-for-point until the final 23 seconds. In the last moments of the game, and with the score tied 44-44, M. Sims calmly sank a pair of free throws to give the Wildcats their final lead of the game. 17 seconds later, Scott tossed in another pair from the charity stripe to solidify the 48-44 win.
The Schley boys returned to action on Dec. 5, taking on Dooly County. The Bobcats came out strong, scoring 38 points in the first half and holding Schley to only 18. The Wildcats’ shooters heated up in the second half, adding 35 more points, but were unable to overcame the early deficit, falling 77-53 in the match.
Both the Wildcats and Lady Wildcats took on Webster County on Dec. 8. The results of these matches were not available at press time.