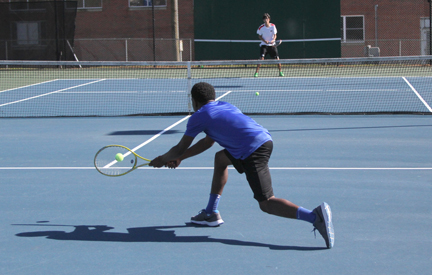 Michael Murray/Americus Times-Recorder: ASHS’ Sage Finch swats the ball back over the net to his Marion foe during the Panthers’ April 8 tourney in Americus. Finch bested his opponent 6-1 and 6-4 in the series.

The Americus-Sumter High School (ASHS) boys’ and girls’ tennis teams concluded regular season competition on April 7 in Americus with a series of matches against Marion County.
The Panthers wrapped up regulation play with an impressive 11-3 overall record on the season while the ASHS girls capped the season off with a comfortable 10-4 record.
Leading up to the season’s end, the Panthers and Lady Panthers traveled to Perry on April 6 to take on the Perry High School Panthers.
The Lady Panthers narrowly edged their non-region opponents in the tourney, winning three out of five matches.
ASHS’ number-two girls player, Morgan Cloutier, battled her way to an initial 6-3 victory before her Perry opponent turned the tables in the second match of the afternoon, dealing her a 5-7 defeat. Cloutier came back to take the tie-breaker round 6-1. 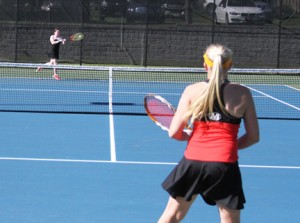 ASHS’ number-three female singles player, Kate Griffith, earned a 6-3 victory in her first match of the tournament and never looked back, shutting out her competition in the second attempt.
The ASHS singles team of Bailey Roberson and Kahria Hadley toppled their opponents in each of their matches, gaining a pair of 6-0 wins.
Number-one singles player for the ASHS Lady Panthers, Jessica Clayton fell in her series after a hard-fought battle as did the doubles team of Wynter Pritchard and Hannah Martinez.
The ASHS boys, on the other hand, efficiently dispatched their hosts on the other side of the court, sweeping the tournament with five overall victories.
Heeral McGhee set the pace for the ASHS boys, opening with a 6-0 win before capping it off with another 6-1 thrashing of his Perry foe.
Number-two singles player, Joseph Ndaayezwi bested his opponent with 6-4 and 6-3 wins while Sage Finch wrapped up the series for the Panthers’ singles players with a pair of 6-1 wins.
The doubles team of Austin Sandwich and Will McCoy conquered their foes with a pair of 6-2 victories as Roger Merritt and John Martinez completed the sweep with 6-3 and 6-4 wins.
The Panthers and Lady Panthers returned to the court the next afternoon for a non-region tilt against the Marion County Eagles and Lady Eagles.
After a hard-fought series, the Panthers were dealt a 3-2 loss in the tournament while the Lady Panthers suffered a 1-4 defeat.
On the boys’ side of the court, Ndaayezwi coasted to a pair of solid wins (6-0, 6-3) while Finch followed suit with 6-1 and 6-4 victories.
After dropping the initial decision, the doubles team of Merritt/Martinez came back to force a tie-breaker with a 6-3 win, but succumbed to a 10-5 defeat in the bonus round.
The girls saw a tough time in their final regular-season series as well, as Griffith was the only Lady Panther to come out ahead with 6-0 and 6-2 wins.
Cloutier pulled ahead early in her series with a 6-3 win, but her opponent staged a comeback in the second match of the afternoon to force a tie-breaker. Cloutier suffered a 10-8 defeat in the final decision.
The doubles team of Roberson/Hadley and Pritchard/Martinez met  similar fates after opening the competition with narrow losses before earning victories in their second matches of the afternoon. Both teams were bested in the tie-breaker rounds.
The Panthers and Lady Panthers traveled to Bainbridge on April 11 to participate in the region 1-AAAA tournament.
The ASHS girls lost their opening match of the tournament to Thomas County Central by a margin of 3-2 to bring the team’s season to an end.
The ASHS boys defeated Crisp County 5-0 in the first round of the tournament to earn the right to face Cook County in round two. The Panthers were defeated 3-0 by Cook and went on to take a 3-2 loss to Westover for a fourth-place region finish on the 2016 season.
With their record, the Panthers earned a spot in the first round of the state tournament, scheduled to take place on April 21.