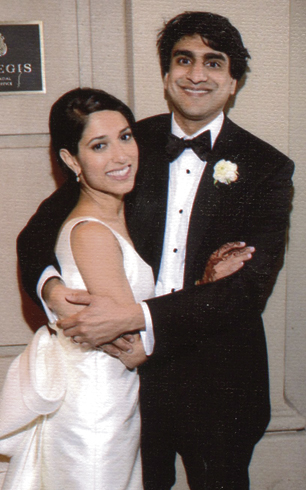 Dr. Erica Maya T. Shantha from Atlanta, Georgia, and Dr. Neil Sanjiwan Tarabadkar from Macon, Georgia, were united in marriage  Oct. 24, 2015, at the St. Regis Hotel in Atlanta, Georgia. The ceremonies began at 4 p.m. with the Baraat procession of family and friends of the groom and the groom on a traditional white horse, arriving at the St. Regis Hotel. The groom was received in the foyer of the St. Regis Hotel by the bride’s parents, Victoria Kay McLeod and Dr. T.R. Shantha, and the bride’s family.
The traditional Hindu wedding ceremony was held in the Astor Ballroom and was officiated by Dr. Bhagirath Majmudar. The ceremony was followed by cocktails and reception. Guests later enjoyed a traditional Indian buffet served with a twist of southern cuisine, music and dancing. The bride and groom celebrated with close family and friends across the United States, London, and India.
Guests from Americus included Mr. and Mrs. Malcom Argo, Mr. and Mrs. Lamar Anthony, and Mr. and Mrs. Kevin Sprott and family.
A rehearsal dinner on Oct. 23 was hosted by the groom’s parents, Dr. and Mrs. Sanjiwan Tarabadkar, on Friday evening at Canoe Restaurant in Atlanta, Georgia.
On Thursday evening, a Mehndi celebration was hosted by Tommie Anne McLeod, Sadie Francis McLeod-Taylor, and Victoria Kay McLeod at the residence of Dr. T. R. Shantha.
Drs. Erica and Neil Tarabadkar will reside in Seattle, Washington,  where she is in the dermatology residency program at the University of Washington and he is completing his residency in orthopedics at the University of Washington.