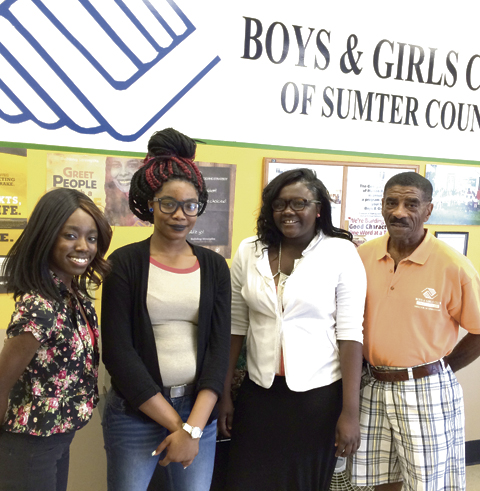 From left are Trenisha Hallmon, program assistant at the Americus-Sumter County Boys & Girls Club; Alexis ‘One’ and Alexis ‘Two,’ members of the Club’s junior staff for the Summer Camp; and Coach Jimmy Green, COO, Americus-Sumter County Boys & Girls Club. The Alexises are two of four young women from the Methodist Youth Home in Americus who worked at the camp through Georgia Teen the past two weeks.

AMERICUS — The Summer Camp hosted by the Americus-Sumter County Boys & Girls Clubs Inc. is almost half over for this year, but the participants and staffers of the camp are ever enthusiastic.
Four of the junior staff, working through Georgia Teen, are residents of the Methodist Youth Home in Americus. The Times-Recorder talked with two of the young women about their experiences working with the camp.
Alexis “One,” a 16-year-old from Atlanta, said she likes kids.
“I go back to where there wasn’t a Boys & Girls Club,” she said, of her childhood in the city. “The kids had nothing else to do except get involved in gangs and violence in the streets. I teach the kids here what I had to go through so they don’t have to go that route.”
Alexis “Two,” another 16-year-old from the Methodist Youth Home, said she likes dealing with children because she has a child herself.
“I was excited about coming to work at the Boys & Girls Club,” she said. “As long they’re happy and we make sure they’re enjoying their summer, they give us so much back. I love coming here.”
Coach Jimmy Green, COO of the Americus-Sumter Boys & Girls Club, commented on the four young women’s performance.
“Since they’re working through Georgia Teen, they are paid staff members, and since they are under 18, they can still become members of the Boys & Girls Club … That goes a long way on the resume.”
Green said the young women had done “a fantastic job” in the Summer Camp environment and he was grateful for their assistance. The other two are Anastasia and Tamya, both 16. 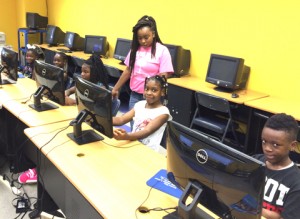 May, standing, a junior staff member, with some of her charges at the Americus-Sumter Boys & Girls Club’s Summer Camp in Americus. Club members, from left, are Jakalyn, Gwenesha, Jakierra, Ny-kierra and Ja’niyah.

On the day of this visit, some of the youngsters were working in the computer lab. The Times-Recorder also talked with them.
Jakalyn, 8, said this is his first year at the camp and his favorite part is “going to the gym.”
Gwensha, 9, who also attends the Club’s after-school program during the school year, loves it.
“The Boy & Girls Club helps us learn a lot of things,” she said. “It’s not about playing all the time, but about learning.”
Jakierra, 10, also attends the Club’s  after-school program, said the Club offers educational games that help them learn.
Ny’kierra, 8, who also participates in camp and after-school, said she really enjoys the educational and fun activities.
Ja’niyah, 8, said she likes to come to the Club with her family and play games. “They help us learn, too,” she said.
May, a 13-year-old junior staff member, from Americus, said she attended the Boys & Girls Club while growing up in New Jersey. She said she was looking for something to do this summer, and gladly took this opportunity.
“I had a whole lot of fun in the Club when I was younger,” she said. “And it’s fun this time, too.”
Green said he wants to extend the camp two weeks past the five-week mark because of the attendance and enthusiasm.
Other Boys & Girls Clubs under the Americus-Sumter County umbrella are in Montezuma (80 members), Furlow Charter School (60 members during Camp and 110 in the after-school program) and the Jimmy and Rosalynn Carter Club in Plains (30 members).
The Boys & Girls Club always needs more funding. The 18th annual Steak & Stake Banquet is coming up July 19 at  Georgia Southwestern State University’s Success Center. Keynote speaker will be Dr. Wintley Phipps, a world-renowned vocal artist, pastor, motivational speaker and educational activist. President Jimmy Carter and Rosalynn Carter will be in attendance.
Sponsorships and tickets are still available.

PLAINS — Looking for a unique way to celebrate Independence Day this summer? What better than sharing in a community-wide... read more