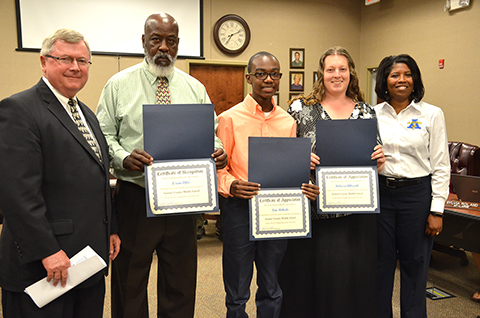 AMERICUS — Following in its tradition, the Sumter County Board of Education recognized two teachers, a student and a parent from a school in the system during its September board meeting.
Interim Superintendent Larry Walters introduced each of those recognized, all from Sumter County Middle School.
Walters said, in introducing Oscar Ellis, that Ellis is entering his 30th year of teaching.
“He is currently teaching social studies at Sumter County Middle School. He is a graduate of Fort Valley University. Mr. Ellis was chosen as teacher of the month at Sumter County Middle School because of his positive and encouraging attitude. He works tirelessly on bus duty each afternoon (rain or shine) to ensure that all students enter the bus safely and orderly. He is truly and asset to our school and the community.”
The superintendent also introduced Rebecca Albrecht, who is entering her 12th year as an educator.
“She was born and raised in Milwaukee, Wisconsin. She attended Lawrence University in Appleton, Wisconsin, for her undergraduate degree in history and English. She continued her education in the graduate program at Auburn University in Auburn, Alabama, where she received a master’s degree in history.
“She has been teaching at Sumter Middle School since 2008, as was selected as teacher of the month for her leadership skills and positive rapport with students at Sumter County Middle School. Her homeroom class was the first class to return required beginning of the year documents.”
Parent Susan Ruckman was also recognized by the board. Walters said she is an active parent in the Sumter County School System and the community.
“She is a leader in the community who supports public education. She is an avid supporter of sports and her daughter, Anna Ruckman, is a member of the Middle School Softball team. In addition to attending athletic events, she can be found volunteering and supporting youth and children through many organizations in Americus and Sumter County including the local Boys and Girls Club.”
And student Ian Roberts was recognized as well.
A seventh-grade Beta Club student, he was described by Walters as “an avid reader. He has received numerous awards for reading and is a member of the band at Sumter County Middle School  Ian is an Honor Roll student who makes good choices and is well respected by his peers and teachers. He enjoys Lego Technical Design blocks, and after high school he plans to attend the University of Georgia and become an architect.”
Following the recognition and photos. The board and audience were invited to congratulate those honored. 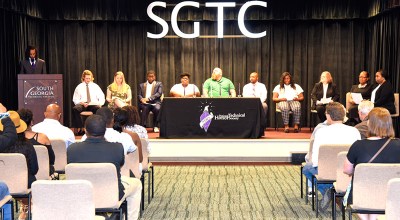 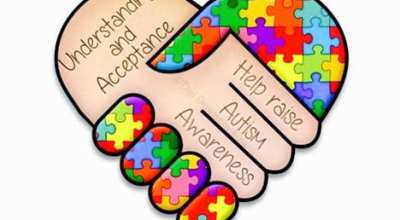 Getting ‘the big picture’ at Webster County High School