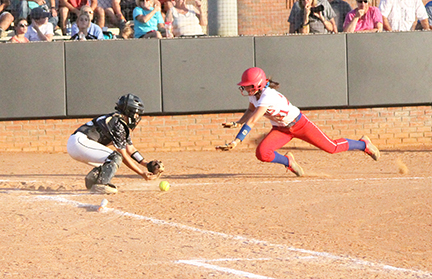 Michael Murray/Americus Times-Recorder: Schley catcher, Havalyn Cross, prepares to scoop up the ball and tag out an approaching Hawkinsville runner on Sept. 27 in Ellaville.

The Schley County Lady Wildcats have been tearing up the diamond this season, winning 15 straight region contests without dropping a single decision. The Lady Wildcats clinched the first-place spot in Region 4-A on Sept. 29 with an 8-1 victory over the Marion County Lady Eagles.
To date, the Lady Wildcats have amassed an impressive 18-5 overall record in 2016, with only two more contests to go in regular-season competition.
The Lady Wildcats haven’t been simply winning their matches, they have been winning by large margins in many cases. The team has been steadily rolling over opponent after opponent all year, taking their victories by an average of 8.9 points in the matches that they have won so far. On the flip side, the Lady Raiders have lost by an average of only five points per match in the decisions that they have dropped.
On the team’s season thus far, second-year Lady Wildcat head coach, Jody Sellars told the Times-Recorder, “I feel strongly that we will be in the top five going in to the state playoffs. I have a very young team that has one senior and three juniors (one of which has been injured and is missing the entire season and would have been an important player for us- Saylor Ann Cross).”
“We struggled with doing the little things right at the beginning of the season but have done nothing but progress throughout,” Sellars continued. “My team has come together well and is much better than we were game one of the season. If we take care of our business, we will get a bye during the first round of state playoffs and should host the second round at home. We will then be headed to Columbus. We are a young team that is playing with a ton of confidence which is very dangerous. I don’t believe my girls fully understand how good they could be, but that will come with time.” 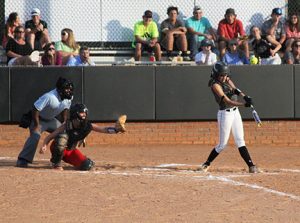 Of the Lady Wildcats’ 17 wins to date, the team has won 11 games by seven or more points, with their largest margin of victory coming in a 17-point shutout against region opponents, the Manchester Blue Devils. The Lady Wildcats have won a pair of games by a margin of 16 points this season, with a 16-0 victory over Dooly County and another shutout of Manchester.
On the team’s losses so far this season, Schley’s girls have dropped a pair of one-point decisions. In August, the Emmanuel County Institute Lady Bulldogs edged the Lady Wildcats in a 7-6 defeat. Early in September, the Bleckley County Lady Royals dealt Schley a 10-9 defeat in extra innings.
The Schley girls have lost matches to only two teams in their Single-A division to date; Wilcox County and the Emmanuel County Institute (ECI). Both of these teams have enjoyed impressive seasons as well, with Wilcox amassing a record of 11-2 in Region 2-A competition and coming in at 19-4 overall as ECI has built a 10-0 record in region 3-A, with a 17-4 overall record. As leaders in their respective regions, both of these teams have likely earned a spot in the state playoffs, so the Lady Wildcats may have an opportunity in the coming weeks to even the score.
As of Sept. 22, the Lady Wildcats had two of the team’s regular players with a .500 batting average or better; Carmen Phillips and Emily Campbell.
As of that date, Phillips had connected on 25 of 49 at-bats to score 20 runs and bat in another 12 runs. Phillips had also belted three doubles and one homerun for the Schley cause. By late September, Campbell had stepped up to the plate 54 times to connect on 27 hits. Campbell has completed her round trip 16 times and driven in 16 other runners. With an impressive 10 doubles, two triples, and three homeruns, Campbell’s batting skills will assuredly be an asset for the team in the upcoming playoffs. Phillips leads the team in steals with 15 nabbed bases under her belt, followed closely by Campbell with nine.
Laine Frazier has had an exciting season from the batter’s box as well, collecting 23 hits on 50 attempts to bring her average to .460. Frazier has contributed six RBIs and 15 runs to the team’s season while hitting three doubles and one triple.
Kelli Rees, Raylee Lamb, Alexis Bradshaw, Saige Whaley, and Mindy Carol Register are the team’s other sluggers that have broken the .300 batting average mark after more than five at-bats.
The Lady Wildcats have two regular-season contests before the team sets their sights on the state playoffs. The Lady Wildcats will host the Taylor County Lady Vikings on Oct. 3 for their final region match-up of the year. Schley’s girls will draw the curtain on the regular season on Oct. 7 with a match-up against the Class five-A Veterans Lady Warhawks.
The schedule for the opening rounds of the state playoffs is yet to be determined as of press time.