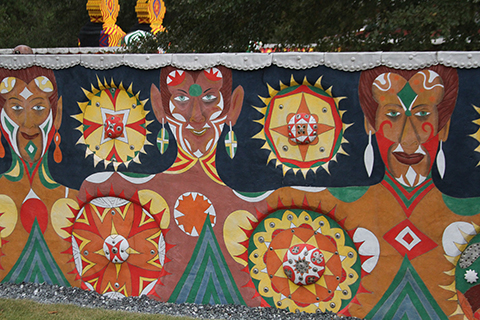 This is just a small portion of the artwork at Passaquan that has been recently restored.

BUENA VISTA – Residents of Sumter County and the surrounding areas are generally aware that this region of Georgia is rife with impressive and important sites of historical significance. From Americus, an individual can hop into a car and, after a short drive, be standing at the door of a former U.S. president’s boyhood home or overlooking the remnants of one of the most tragically significant sites from the American Civil War.
Oftentimes, locals overlook another very important site just down the road: Pasaquan.
Considered by many to be among the most important folk/visionary art environments in the nation, the Pasaquan compound lies quietly nestled alongside a country road just a few miles outside of Buena Vista. If an individual driving by didn’t know where to look, it would be very easy to miss.
Behind the shallow line of trees, however, visitors to the site are immediately immersed in the bright, colorful world created by former Buena Vista resident, Eddie Owens Martin.
Over the years, the vibrant, lively compound found itself falling into disrepair after Martin’s death in 1986. Luckily, for art lovers the world over, the Pasaquan Preservation Society assumed the duties of maintaining the site, later seeking help from the Kohler Foundation, a philanthropic organization dedicated to the preservation of important works of art. The Kohler Foundation soon partnered with Columbus State University (CSU) and Parma Conservation (another organization dedicated to the preservation of paintings and murals) to restore the compound to its former glory. The site was later gifted to CSU, which will continue to preserve and maintain Martin’s legacy. 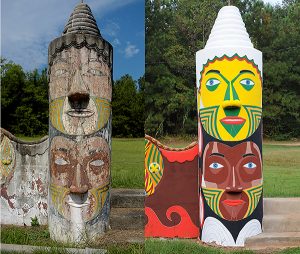 A before and after of just one of the installations that was renovated.

After over two years of painstaking restoration efforts, in which a group of talented and experienced individuals pored over the site, the restoration effort was recently completed.
A grand reopening event is scheduled from 10 a.m.-6 p.m. Oct. 22. The event will include live musical performances by Col. Bruce Hampton, Jake Xerxes Fussell, Blackberry Possum, and Neal Lucas and the Freezer Burn as well as performance art by GLO. The Technicolor Face Painters and the Cosmic Cosmetologists will be on site as well, painting patrons’ faces and arranging hairstyles to mirror the many colorful and playfully-rendered figures depicted in the compound. Food truck vendors will be located at the site as well.
Tours of the site will be offered at the grand opening, detailing Martin’s artistic visions as well as the restorative processes undertaken to rejuvenate the compound. The event is offered free of charge.

A brief history of Pasaquan
Martin, or as he later dubbed himself, “St. EOM”, was a self-taught artist and builder, who had hitchhiked to New York City as a young man in the 1920s. Martin made a name for himself in the city as an artist, fortune teller, and street hustler, eventually becoming so well known in Greenwich Village that the Village Voice published an article about him in 1954, in which they referred to the eccentric character as “The Village Wizard”.
Prior to his return to South Georgia, Martin claimed in 1935 that he began receiving visions from a group of extra-dimensional beings which served as his inspiration to declare himself the first “Pasaquoyan”, a portmanteau of the Spanish word for “past”, and what Martin believed to be an “oriental” word for future.
Martin returned to Buena Vista in the 1950s, following the death of his mother. He then immediately began devoting his life to the construction and decoration of the compound, recreating the landscape of his visions.
Martin incorporated symbolism from many different cultures (including Northwestern Native American, South American, the South Pacific, and Far Eastern cultures, to name a few) into the artworks that he erected on the site. He also incorporated elements from several different religious doctrines into his implementation of the compound. Martin believed that reflection on all cultures and religions was necessary for individuals to live in harmony and peace, and references to this belief can be found throughout the site.

The site itself
The site spans seven acres and includes over 900 feet of painted walls, totems, and other decorative structures as well as six major structures and a sand pit in which Martin would often perform ritual dances.
On a recent tour of the site, Pasaquan director, Michael McFalls, discussed the process of the site’s restoration, stating that newer, more resilient paints had been used in the renovations to ensure that every square inch of the artwork remains protected and vibrant for years to come. On the renovations, McFalls told the Times-Recorder, “It was fascinating … removing the old paint and seeing the different layers that he had put on over the years. It was like tree rings.”
Pasaquan site caretaker, Charles Fowler, helped in the restoration process as well. “It was an interesting feeling, being an artist and recreating another artist’s work,” Fowler stated, during the tour. “Usually, the sections that we were working on were very small. We tried to make sure that everything is exactly how it was when we found it.” Fowler said that the restorative team had documented every tiny nuance of the sculptural architecture and painting son the site before restoring the sculptures and repainting them with precise detail to reflect Martin’s vision. He went on to say that the team had attempted, when possible, to restore the sculptures using the crumbling remnants of the original cement that Martin had installed well over 30 years ago.
McFall stated that many of Martin’s early paintings, dating back to the late 1920s and early 1930s, are currently on display at the site as well. He also informed the Times-Recorder that an exhibition of around 80 never-before-seen drawings by Martin would be held at the LaGrange Museum, beginning Oct. 28. The exhibition, titled, “In the Land of Pasaquan” is being curated by Fred Fussell, a member of the board of directors of the Pasaquan Preservation Society.