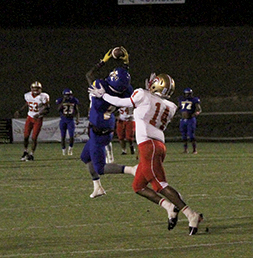 Michael Murray/Americus Times-Recorder: ASHS’ Eric Brown picks off a Hardaway pass during the first quarter of the Panthers’ Oct. 21 tilt against the Eagles in Americus.

AMERICUS – The Americus-Sumter High School (ASHS) Panthers football team had a lot to celebrate on the evening of Oct. 21 in Americus. The Panthers hosted newcomers to Region 1-AAAA, the Hardaway Hawks, for ASHS’ Homecoming and pulled in a 34-18 victory over a team that will, most likely, become a bitter rival in the years to come.
With the win, the Panthers improve their overall record to 4-4 while jumping to 3-2 in the region. The Hawks took a hit in the match-up, dropping to 4-3 overall and 2-3 in the conference.
Following an afternoon of celebration and fellowship by several alumni, who gathered to tailgate prior to the game, the Panthers hit the field as several former players looked on, including freshman UGA defensive tackle, Tyler Clark, and the school’s aptly-named 2015 Homecoming King, Adam King.
The Panthers got the scoring started early in the contest after holding Hardaway’s opening drive to only four downs.
Less than two minutes into the action, ASHS forced a punt which Kobe Lewis picked up near the home team’s 40 yard-line and bobbed and weaved through the Hawks’ defenders for a 60-yard touchdown.
Carlos Hernandez added an extra point kick to give the Panthers an early 7-0 lead.
The Panthers then kicked off to the Hawks, but would not have to relinquish the ball for long. On first and ten from Hardaway’s 21 yard-line, the Eagles’ quarterback launched a long bomb that was picked off by ASHS’ Eric Brown.
Hardaway’s tough defense tightened up following that turnover, quickly forcing the Panthers to boot their first punt of the game, and retook the ball at their own 23 yard-line.
The Panthers returned the favor, holding the Hawks to three and out before taking possession at their own 38.
On the first play of the return drive, ASHS quarterback, AJ Payne, launched a long bomb that zoned in on Daveon Johnson, who deftly plucked the ball out of the air and took off on a 62-yard jaunt that landed him in the end zone. Another PAT from Hernandez left the Panthers with a comfortable 14-0 pad with 5:30 left in the initial quarter. 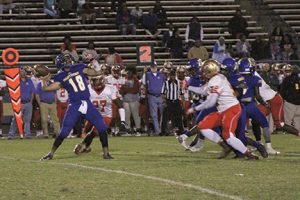 Michael Murray/Americus Times-Recorder:
ASHS’ AJ Payne winds up to throw a long bomb to Sage Finch during the second quarter of the Panthers’ Oct. 21 match-up against the Hardaway Hawks in Americus.

Hardaway finally made the scoreboard after an 11-play return drive, propelled by the efforts of running back, Marco Lee and wideout, Jakobe Ellerbee. Hardaway slotback, Jaron Early, broke through the Panthers’ defensive line from the four yard-line to narrow the home team’s advantage to 14-6.
The Hawks struck again halfway through the second frame, steadily pushing forward on another 11-play drive, spanning 79 yards. This drive was also moved forward by the talents of Lee and Ellerbee, who combined for nine carries as the team progressed. From the Panthers’ 31, Early managed to slip past ASHS’ defensive line and break away for the touchdown.
The Hawks opted to go for a two-point conversion in an attempt to even the score, but the team’s pass was intercepted by Lewis to leave the Panthers up 14-12 with 5:20 remaining in the half.
The Panthers certainly weren’t done, however. Two possessions later, after a three-play drive, highlighted by a long reception by Sage Finch and a leaping catch (over two defenders) by Johnson, ASHS quarterback, AJ Payne, ran a keeper 43 yards into the end zone with 1:11 left to play in the half.
When the teams retired to the locker room for intermission, a ceremony was held in which Homecoming Queen, Kelly Ingle, was crowned, as was Homecoming King (and Panther team member), Michael Terry.
When the teams returned to the gridiron, Hardaway made their stand after holding the Panthers to four plays on the opening drive of the second half. In nine plays, pressed on by the efforts of Lee, Ellerbee, and Early, the Hawks broke the plane from the one yard-line to bring the visitors within two points of ASHS’ lead. A host of ASHS defenders helped stop the visitors’ two-point conversion attempt to prevent the Hawks from tying the score.
The Panthers kept their claws out on the 69-yard return drive, taking advantage of a series of carries by Brown and Payne, as well as pair of completions to Finch to press deep into Hardaway’s red zone, eventually landing at the two yard-line. From there, Payne made a rush into scoring territory and Hernandez added another PAT to widen ASHS’ advantage to 27-18 with 1:35 remaining in the third stanza.
The home team struck again on their following possession on a 10-play drive that covered 92 yards after making a goal-line stand that ended Hardaway’s progress at the eight with Brown’s second interception of the contest.
Stephon Luster got in on the action this time around as well, adding yardage to the Panthers’ progress as did Payne and Lewis. Finch snagged his third long reception of the game to help put the ball in position for Brown to make a 16-yard dash into the end zone without even being touched by an opponent. Hernandez then nailed one last PAT to put the game away for the hosts.
The Panthers will return to action on Oct. 27, traveling to Columbus for a region tilt against the Carver High School Tigers.