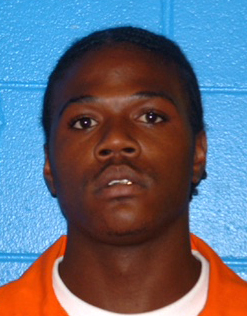 Minguell K. Lembrick, the suspect in the shooting of two police officers in Americus Wednesday morning.

AMERICUS — As local and area law enforcement, and the Georgia Bureau of Investigation continued Wednesday evening to search for Minguell K. Lembrick, the 32-year-old suspect in the shootings of two police officers Wednesday morning, the GBI Director, Vernan Keenan, said a $20,000 reward is being offered to whoever provides information leading to the arrest of Lembrick. 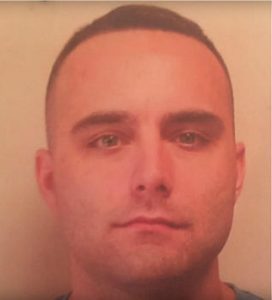 Lembrick is the man who police believe shot GSW Police Office Jody Smith and Americus Police Officer Nicholas Smarr when they responded to a domestic disturbance call at 9:40 a.m. to Country Club Apartments. Both were taken to Phoebe Sumter Medical Center with head injuries. Smarr, 25, died of his injuries, and Smith was airlifted to a Macon trauma center in critical condition.

Lembrick, described as a black male, 6’1″ tall and weighing about 170 pounds, posted a video on his Facebook page shortly after the shootings, saying good-bye to his friends and posting that he would not go to jail. The post was taken down later in the day. 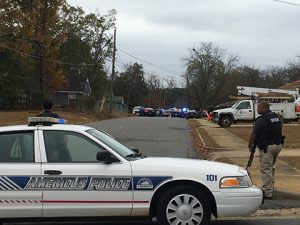 This area of Furlow and Harris streets remained a focus of the manhunt for most of the day Wednesday.

As nightfall neared, the helicopters that had been circling over central and eastern Americus all day landed, and the second press conference was held at the Griffin Bell Golf & Conference Center, which is located between the shooting scene and the university, was set up as the command center for the intensive manhunt. News media from as far as Atlanta were present and law enforcement agencies from all over Georgia were represented, with the investigation being led by the GBI.

There was a steady stream of vehicles bringing in food for the law enforcement, from the Salvation Army, Sumter County EMA, and several local restaurants. The Americus Fire & Emergency Services truck rolled in pulling a giant grill and readying to fire it up. 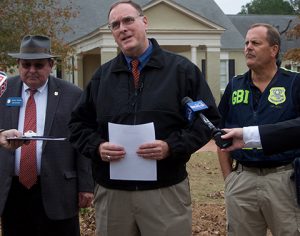 At the first press conference, held after noon Wednesday, Americus Police Chief Mark Scott, center, is shown with Vernan Keenan, director of the GBI, at left; and Special Agent in Charge Danny Jackson, at right, of the GBI Region 3 Office, Americus.

Scott recapped the happenings of the day. He said they need the help of the public in taking Lembrick into custody, but cautioned not to approach the suspect because he is armed and dangerous.

“We’d like to express our appreciation to the community for the sympathy and support we’ve had today. It’s been overwhelming, and we thank you for the love and prayers that have gone up for these two officers and their families. We ask that you continue to pray for them and keep their families in your prayers.” 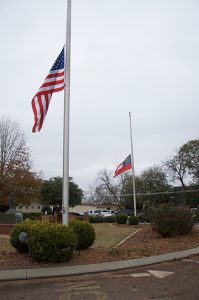 The flags were flown at half-staff at the Griffin Bell Conference Center Wednesday in observance of the slain Americus Police officer, Nicholas Smarr.

Chief Tracey of GSW said, “Our campus sits in the middle of the city, and we regularly help assist other officers with the city when they are called. … Our hearts and prayers go out to Officer Smith and Officer Smarr’s family.” 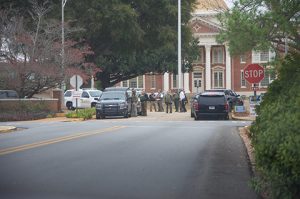 The scene in front of the GSW Administration Building Wednesday as the lock down continued. 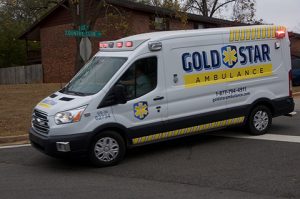 An ambulance leaves Country Club Apartments, taking one of the officers who was shot to Phoebe-Sumter Medical Center.

“The GBI and FBI are offering a $20,000 reward for the arrest of the suspect in this case. We have had great support previously in this type of investigation and often a reward will often bring citizens to the forefront and provide us with the information. In this case, the reward is for his arrest; we’ll take care of the prosecution and everything from that point on. This is a very dangerous individual. We need to have him off the streets. We want him arrested so he can face the courts.”

Keenan said Smarr’s body would be transported to the GBI Medical Examiner’s Office in Macon Thursday morning for autopsy. He will escorted by the Georgia State Patrol and other law enforcement officers in an honor guard.

Patterson of GSW expressed that the university’s hearts and prayers were with the families of the victims. 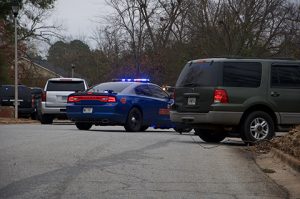 The scene of the shooting incident, from South Lee Street.

“We are very encouraged by our response on campus. Within minutes of the call our campus was on lock down. Our students, faculty, and staff on campus were notified of the incident and we remain on lock down now during the pursuit of this individual. The campus is safe, and at no time were any students involved or endangered. We’re very proud of the response of our community and the campus police. The Americus Police Department and our police department work very, very close in the efforts, and we offer our thoughts and prayers.”

During questions, Chief Scott was asked about Lembrick’s history. He said that at the time of the call for the domestic case, they didn’t know they would be responding to Lembrick. He said Lembrick had an active warrant for kidnapping and other charges related to a previous case.

When asked if Lembrick is still in the area, Scott said they continued to followup on leads but didn’t actually know where he was. He added that the person that Lembrick had been involved in the domestic case with had been safely removed, along with a child. Neither were injured.

Chief Scott said, in response to a question about the loss, “It’s a tremendous loss for our family. It’s been many, many years since we’ve had an officer die in the line of duty in Americus although our neighbors in Peach County just experienced the exact same thing. It’s a tragedy beyond words.”

UPDATE: As of 5:20 p.m. Officer Jody Smith was in surgery and “breathing on his own,” according to a post by a friend on Smith’s Facebook page.