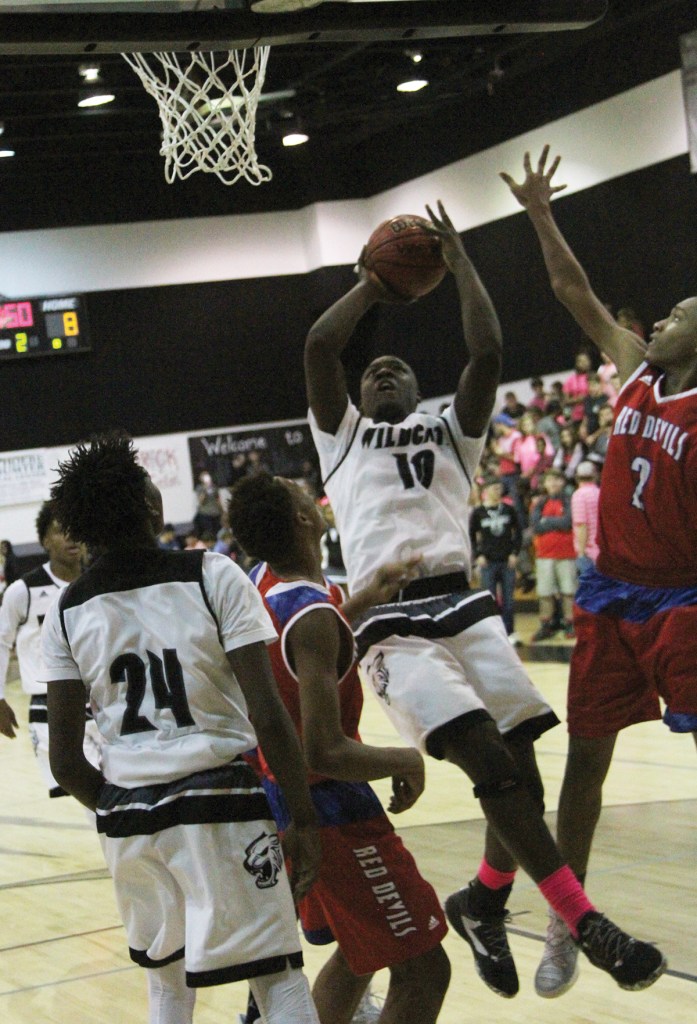 MICHAEL MURRAY I ATR: Schley County freshman, Zykievious Walker (10), takes the ball to the bucket during the Wildcats’ Dec. 2 tilt against the Hawkinsville Red Devils in Ellaville. Walker contributed 22 points to the Wildcats’ victory.

ELLAVILLE – The Schley County High School Wildcats and Lady Wildcats basketball teams had a busy weekend, with the teams facing off against Hawkinsville High School on their home court on Dec. 2 before heading to Buena Vista to take on Marion County on Dec. 3.
Schley County’s boys clawed their way to a pair of victories over the weekend, taking down Hawkinsville’s Red Devils 51-45 before earning a victory over the Marion County Eagles in an 82-78 road slugfest.
The Lady Wildcats didn’t have as much luck in the weekend series, as the team succumbed to a late surge from the Lady Red Devils on Dec. 2 to suffer a 46-34 loss. The following afternoon, the Lady Wildcats were overpowered by a tough Marion County ladies’ team which dealt the guests an 81-18 defeat.
With the pair of wins, the Wildcats remain undefeated on the young season with an overall record of 3-0. The Lady Wildcats’ overall record drops to 1-2 following the series.
Schley’s girls got off to an impressive start in the weekend opener, with Emily Campbell opening the scoring for the home team with a jumper, followed by a three-pointer to give the hosts a 5-2 advantage. Carmen Phillips then followed with a steal and assisted Chelsey Carter in a lay-up to add to the pad. Carter then tossed in a Raven Butler-assisted lay-up, followed by another fast break two-pointer to give the Schley girls their largest lead of the game, 11-3, halfway through the first quarter. The visitors steadily made their comeback over the next four minutes, coming within one (11-10) by the 1:00 mark. Campbell closed the initial frame with a fast break lay-up to expand Schley’s advantage to 13-10 at the buzzer.
The score remained tight in the second stanza and, by the time the buzzer sounded, the Lady Red Devils had managed to tie the score 17-17.
The teams continued to battle through the third frame, with each stubbornly refusing to cede any significant ground. Entering the fourth quarter, the Lady Red Devils had managed to pick up a 25-23 lead.
In the final stanza, the Lady Red Devils stepped up their offense, taking off on a 7-0 run that Schley’s Rachael Mullis soon brought to a half with a long three-pointer.
The visitors exploited a series of turnovers over the next four and a half minutes to cinch the 46-34 victory. 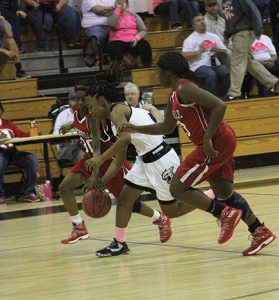 MICHAEL MURRAY I ATR:
Schley County’s Chelsey Carter (center) attempts to steal the ball from a Lady Red Devil foe during the second half of the Lady Wildcats’ Dec. 2 contest against Hawkinsville. Carter contributed 12 points to the Schlaey cause in the match-up.

Carter set the pace for the Lady ‘Cats in the contest, tossing in 12 points while contributing three steals.
Campbell followed closely with 11 points, one steal, and one assist. Butler dished out one assist in addition to her four points while Phillips added a steal and an assist to her two points. Mullis added a three-pointer while Campbell tossed in two long shots. Maddie Tobin added the final two points for the Lady ‘Cats.
The details of the Lady Wildcats’ Dec. 3 match-up against Marion County were not available at press time.
When Friday evening’s opener was concluded, the Wildcats took the court to avenge the earlier loss, kicking off the action immediately with a steal executed by freshman, Zykievious Walker, who would prove to be the thorn in the side of the Red Devils throughout the remainder of the contest. Schley’s Kevin Stone followed with a steal of his own and promptly passed to Ja’Marcus Scott, who honed in from beyond the arc for three points.
The teams battled over the following six minutes, with the visitors carving out a six-point lead (10-6) before the ‘Cats negated the threat with a jumper from Walker and a fast break lay-up from Dorion Beteman. Hawkinsville followed with a three-point play to take a 13-8 lead into the second stanza.
The Wildcats battled their way back into contention over the following eight minutes, highlighted by a three-pointer from the wing tossed in by Stone. The score remained tied 19-19 as the teams hit the locker room for intermission.
The Wildcats took the lead for good upon returning to the court when Marquell Sims opened the second half with a fast break lay-up. Over the following six minutes, the Wildcats amassed a nine-point pad (35-26) before a Hawkinsville sharpshooter ended the quarter with a trey.
The Wildcats continued to carefully guard their advantage in the final stanza, despite a surge from the visitors and, eventually, found themselves on the high end of a 51-45 decision at the final buzzer.
Walker set the bar high for the Wildcats, putting 22 points on the board for the Schley cause. Walker also executed two steals and dished out one assist in the contest. Scott was the only other Wildcat in double figures with 10 points. Stone added another seven points to the final tally while dishing out four assists and nabbing one steal. Sims put up five points to go with his two steals and one assist while Bateman added six points and assisted on one shot. Christian Arnett contributed three points.
Scott contributed a pair of shots from beyond the arc while Stone drained one three-pointer.
The details of the Wildcats’ Dec. 3 match-up against Marion County were not available at press time.
The Schley boys and girls returned to their home court on Dec. 6 to take on Brookstone. The results of these contests were not available at press time.
The teams will return to action on Dec. 9, traveling to Montezuma to face Macon County before taking on another opponent, Central-Talbotton, on the road the following evening.