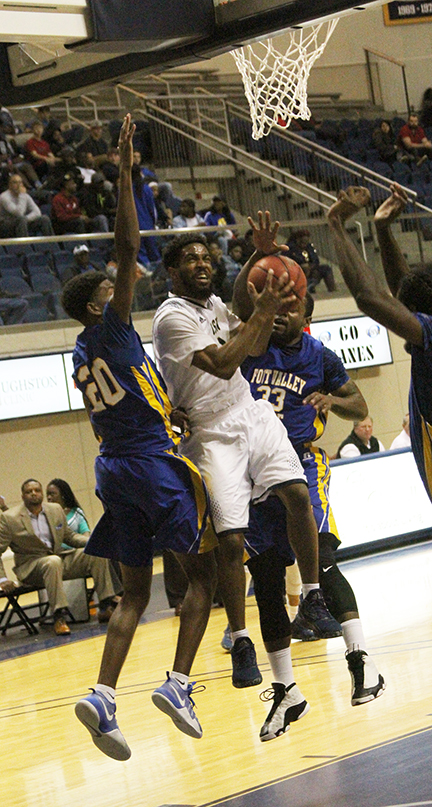 MICHAEL MURRAY I ATR Cameron Dozier takes the ball to the bucket during the first half of the GSW Hurricanes’ Dec. 14 tilt against Fort Valley State. Dozier recorded a double double in the Hurricanes’ home victory.

AMERICUS – Double-doubles by senior guards, Cameron Dozier and Tyrone Wooten, spurred the Georgia Southwestern State University (GSW) men’s basketball team to a 74-63 victory over Fort Valley State University (FVSU) on Dec. 14 in the Storm Dome in Americus.
Dozier poured in 24 first-half points en route to a game-high 30 to go with his 11 rebounds while Wooten posted a game-high 14 boards to go with 11 points.
GSW snapped a four-game skid to pick up its second win of the season and improve to 2-1 at home while Fort Valley State saw its record dip to 3-6.
Dozier scored the first six points of the game and nine of the Hurricanes’ opening 15 points to ignite a 15-2 run straight out of the gate. Dozier answered a three-pointer from FVSU’s Chris Smoak with a trey of his own to give the Hurricanes an 18-5 lead with 14:24 left in the half.
The Wildcats pulled within five (25-20) before back-to-back three-pointers from Dozier put the Hurricanes on top by double figures again, 31-20. 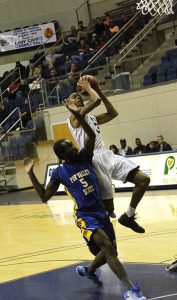 MICHAEL MURRAY I ATR: Tyrone Wooten (right) takes the ball to the bucket during the first half of the GSW Hurricanes’ Dec. 14 tilt against Fort Valley State. Wooten both recorded a double double in the Hurricanes’ home victory.

FVSU chipped away over the final eight minutes of the period and managed to cut the lead to a point, 38-37, heading into the break.
The Wildcats took their only lead of the night when Anton Hurst opened the second half with a basket.
Brandon Price answered with a three-pointer on the next GSW possession and after FVSU’s Denard Williams tied the game at 41-41, Wooten put the Hurricanes on top for good with a long shot from beyond the arc at the 17:33 mark.
GSW held the Wildcats scoreless for a stretch of six minutes and 45 seconds during the middle of the period to thwart any thoughts of a comeback.
The Hurricanes won the battle on the boards for the first time this season, 45-34, and dished out more assists, 16-10. GSW held the Wildcats to 20 percent shooting from beyond the arc (five of 25), while knocking down 10 three-pointers for the second consecutive game.
Tevin Wise scored a season-best 11 points for GSW and Price added 10 points, along with a game-high seven assists.
FVSU was led by James Barnes’ 17 points and eight rebounds off the bench. Barnes sank seven of 10 shots during his 19 minutes of action. The Wildcats did not have a starter score in double figures.
The Hurricanes entertain Francis Marion on Dec. 17 at 3:30 p.m. Santa will be in the Storm Dome at 2:30 p.m. and free elf hats will be given to the first 100 kids and college students through the door.