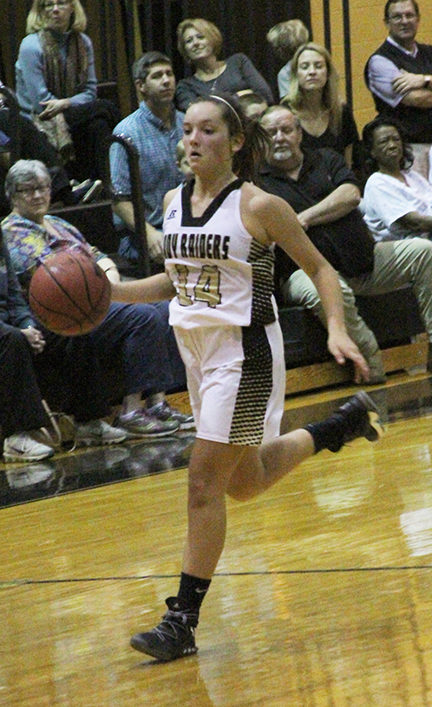 ATR FILE PHOTO: Pictured above, Southland’s Kathleen Kinslow was the leading scorer for the Lady Raiders in their contests against Lee-Scott, Highlands, and Georgia Christian.

The Southland Academy Lady Raiders basketball team has been busy over the past several weeks with a series of road tests.
The Lady Raiders kicked off the action, traveling to Auburn, Al. on Dec. 10 to battle Lee-Scott Academy. The Southland ladies faced tough competition in the contest, suffering a 46-18 defeat.
The Southland crew redeemed themselves the following week with a trip to the Georgia Christian School tournament in Valdosta on Dec. 16-17. The Lady Raiders returned with another pair of victories under their belts; a 50-13 defeat of the Highland Christian Academy Lady Eagles and a 48-28 rout of the Georgia Christian School Lady Generals.
Following this series of road tilts, the Lady Raiders’ overall season record jumps to 5-2.
Despite an uncharacteristically slow performance from the Southland squad in the Lee-Scott contest, the Lady Raiders did see a few highlights in the match.
Kathleen Kinslow set the pace for the visitors with eight points scored, followed by Holly McCain, who contributed four points and snagged six rebounds. Macy Williams supplied four points and four rebounds in the tilt while Savanna Banks tossed on a bucket and brought down five boards.
The Lady Raiders kicked it up a notch when they returned to the hardwood to face Highland Christian Academy. Kinslow led the team again, putting 12 points on the board in Southland’s 37-point victory. Banks followed closely with eight points, seven rebounds, and a pair of blocks. McCain tacked on another six points and brought down four rebounds while Karleigh Werling tossed up six points. Williams completed the tally with four points.
The Southland crew rode that momentum into the following day’s action to make a clean sweep in the tournament, earning a significant 48-28 win over their Georgia Christian hosts.
Kinslow, once again, paced the team with 14 points and three steals. Sydney Payne joined her in double-figures with 10 points, five rebounds, and three steals. Banks added another nine marks on the board as she supplied five rebounds. Cassi Bass tacked on seven points while Kendall Kirkland and Williams each added two points and five rebounds to the Americus team’s stats. Calyn Fort nabbed three steals in the contest.
The Lady Raiders will be taking a break until Dec. 29 when they travel to Glenwood School in Phenix City, Al. for the Border Wars tournament. The Southland crew is scheduled to take on Edgewood Academy.
The Lady Raiders will return to their home court on Jan. 3 to host the Westwood Lady Wildcats.