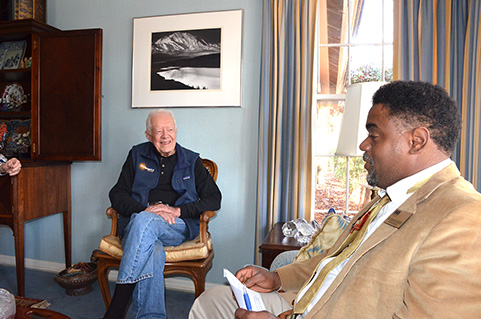 PLAINS — Jimmy Carter came into politics through, and because of, public education. His first political position was on the Sumter County Board of Education. As state senator, he was on the education committee and was driven by the “Brown versus Board of Education” desire to desegregate schools. He also worked to change the status of Georgia Southwestern College from a two-year school to a four-year school. As United States President, he created the Department of Education which remains to this day.
Because of this, he is interested in his local school district. Recently, he and his wife Rosalynn met with Sumter County’s newly appointed School Superintendent Torrance Choates, Ed.D., to discuss the status of the public schools and also to answer Choates’ questions about his time in the White House.
“I am completely in favor of public education and have been all along,” Carter said. “I put public education on the top of my responsibilities as president. Before I came to office, education was buried under the Department of Health and Welfare before I created its own department.”
Carter was pained to see that the great strides he and his southern homeland had made in racial integration during the 1960s and ‘70s seem to have reverted back to a more segregated school system.
“I think in the last 10 years, we’ve had a setback,” said Carter. “When I became president, the whole country had breathed a sigh of relief that we’d overcome race problems. In the last few years, we see divisions still there.”
Carter had staked much of his career on the race issues, declaring in his inaugural speech as governor, “I say quite frankly that the time for racial discrimination is over,” and then subsequently hanging a picture of Martin Luther King Jr. in the Rotunda at the State Capitol.
Clearly interested in the well-being of the Sumter County School System, Carter asked Choates a number of questions, first wanting to know if the board of education had been getting along. Carter had followed the controversies of the board in years past.
“I have a good board,” Choates responded. “They are working together. Each one has their unique passions that drive them as a board member.” 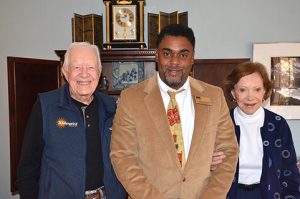 Carter commented that he hadn’t heard of any problems over the past few years.
“When you have a bad teacher in the system, can you get rid of him or her?” Carter asked.
“Yes,” replied Choates, “We are out to make sure we have the best teachers in the system.”
“The other teachers also know when a teacher isn’t doing his or her job,” Carter commented.
Choates asked the president if he missed being in public office.
“No, I don’t miss it, especially not with what is happening now, though during my time in office I did enjoy it,” he said. “As president, I kept our country at peace.”
The Carter presidency was also famous for the Camp David Accords, a hard-fought battle Carter facilitated through 13 days of secret negotiations between Egyptian President Anwar Sadat and Israeli Prime Minister Menachem Began. The result was a historic peace treaty between the two nations after years of war. The peace between those two nations has remained to this day, although hostilities still exist between Israel and some of its other Arab neighbors.
After his defeat to Ronald Reagan in 1980, Carter thinks about the unfinished business he left on the table.
“If I had another four years, we would have had peace between Israel and its neighbors,” he said.