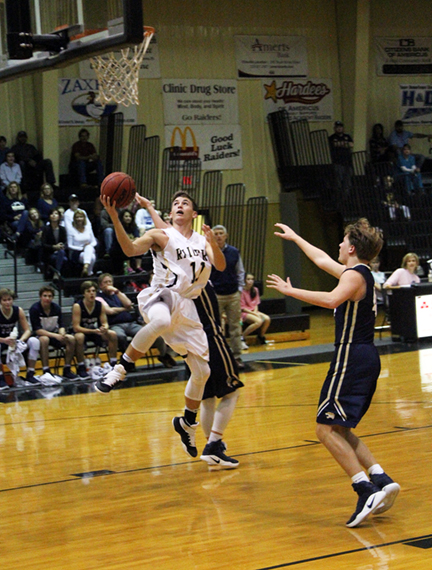 MICHAEL MURRAY I ATR: Southland’s Landon Law breaks away for a lay-up during the first half of the Raiders’ Jan. 13 contest against Tiftarea in Americus.

AMERICUS – Southland Academy opened their Region 3-IAAA basketball schedule on Jan. 13, hosting Tifatrea Academy in Americus.
The Lady Raiders kicked off the evening’s action, making a strong comeback run in the final frame of their tilt, but eventually took a 44-42 defeat. The Raiders then took the court to battle the Panthers. Southland’s boys got off to a fiery start and carefully guarded their early lead, eventually snagging a 54-31 victory.’
Following their region openers, the Raiders jump to 10-5 overall; 1-0 in Region 3-IAAA. With the loss, the Lady Raiders drop to 9-5 overall.
The Lady Raiders kept the score tight through the initial three quarters of their match-up. With the Southland ladies down 34-30 at the end of the third stanza, Tiftarea opened the final period with a three-pointer to expand their pad to seven points. 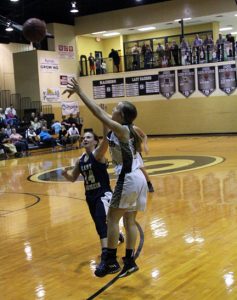 MICHAEL MURRAY I ATR:
Southland’s Cassi Bass launches a three-pointer to bring the Lady Raiders within two points of Tiftarea’s lead on Jan. 13 in Americus.

Southland’s Macy Williams quickly converted a rebound before Cassi Bass put the Lady Raiders within two with a trey. Bass soon followed with a lay-up to tie the score 37-37.
Shortly thereafter, Savanna Banks kept the crowd roaring by tossing in a rebound to put the Southland girls up. Williams promptly added a shot from the charity stripe and Banks immediately assisted Bass in a lay-up.
Tiftarea then added a foul shot and a trey of their own to pull within one point at the 2:00 mark. Over the final 25 seconds, the Lady Panthers tossed up a final trio from the charity stripe to cinch the two-point win.
The Raiders then hit the hardwood to battle their Tiftarea counterparts.
The game got off to a fiery start for the home team with Alex Roach draining a three-pointer early in the first to put the Raiders up 3-1. Chandler Studdard then assisted Parker Weldon in a lay-up to give the Raiders a 5-1 edge before the Panthers answered with a three-pointer of their own. Roach followed with his second long shot of the game and Tiftarea spent the final moments of the initial period draining a pair of shoots from beyond the arc to earn a 10-8 lead at the start of the second quarter.
The Raiders got pumped up in the second frame, with Saige Batten hitting a shot from the foul line before Harrison Bell snagged a steal and fired the ball off to Weldon, waiting under the basket. Weldon sank his shot and was fouled in the process. The resulting free throw put the Raiders ahead 12-11 and the hosts would keep that lead until the game’s final buzzer.
Midway through the frame, Roach added to the Raiders’ pad with a pair of Batten-assisted three-pointers. Batten followed with a steal and a pair of free throws as Bell was warming up for a long-range shot.
After one final block from Bell, the Panthers finally broke their silence with a lay-up and a three-pointer. Southland’s Landon Law capped off the first half with a breakaway lay-up to give the Raiders a 27-17 edge headed into the second half.
The Raiders’ offensive onslaught continued over the next 16 minutes of play, with the home team doubling their score in the second half while holding the visitors to only 14 points, earning the 54-31 victory.
Both the Raiders and Lady Raiders returned to region competition on Jan. 17, hosting Deerfield-Windsor. The results of these games were not available at press time.
Southland’s hoops teams will travel to Hahira on Jan. 20 to take on Valwood School.