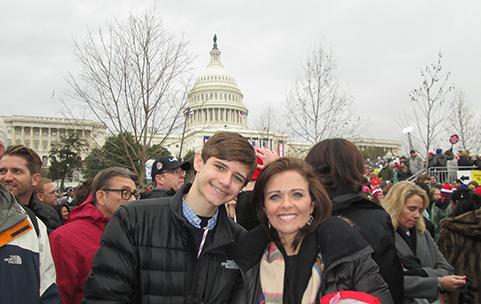 Gage Waddell and his mother Crystal Waddell of Americus were among those attending the inauguration of Donald Trump as the 45th President of the United States last week in Washington, D.C.

WASHINGTON, D.C. — Gage Waddell of Americus has been fascinated by politics since he was four years old and aspires to run for the President of the United States one day. Not only has he attended the Gubernatorial Inauguration of Nathan Deal, but he has also served as a Page at the Georgia State Capitol for former state Rep. Mike Cheokas. Waddell also worked on Cheokas’ re-election campaign.
It is no wonder Gage is interested in politics since his father Mark Waddell served on the Sumter County School Board and is currently a commissioner on the Sumter County Board of Commissioners. After the Presidential Election in November 2016, his mother Crystal knew there was one experience the 14-year-old high school freshman needed. She emailed U.S. Sen. Johnny Isakson’s office requesting tickets for the inauguration of Donald Trump, and in December she received an email that she had received two of 393 tickets allotted to Isakson. His office had requests from over 7,000 people. Gage Waddell was thrilled on Christmas Day when he found out his gift from his parents and his grandmother, Elaine Borders, was a trip to Washington, D.C., to witness history being made.
Gage and Crystal left Wednesday, Jan. 18t to allow time for sightseeing before the inaugural festivities began. On Thursday, they went to Isakson’s office at the Russell Senate Building to pick up their tickets and attend a small reception hosted by the senator.  After lunch at the famous Old Ebbitt Grill and a quick look at the White House, the Waddells toured Ford’s Theatre and the Peterson House before heading to the Smithsonian National Museum of American History. They ended the day at the International Spy Museum. Throughout the day, they enjoyed the sights of historic landmarks such as the Capitol Building, Library of Congress, Supreme Court of the United States, Washington Monument, Union Station and the National Mall.
Early in the morning of Friday, Jan. 20, the Waddells headed to the Capitol Building to witness the Inauguration of the 45th President of the United States.
“Watching the sunrise over the Capitol was a beautiful start to an amazing day. The whole atmosphere was patriotic, and the crowd was so excited,” said Crystal. She and Gage enjoyed every moment of the fanfare and tradition as former presidents were introduced and the new president was sworn in. They also attended the inaugural parade as it traveled down Pennsylvania Avenue.
Gage said, “It was an experience of a lifetime to be able to witness such a historic moment, and it is a day I will never forget.”
While in Washington, the two met up with friends from Georgia and were introduced to many new faces on Capitol Hill. At dinner Friday night, the Waddells had the pleasure of dining at the restaurant, The Monocle, at the same time as Alabama Sen. and Attorney General Nominee, Jeff Sessions.
“Gage and I feel so fortunate to have had the opportunity to see the culmination of the American election process by attending the inauguration. It is a trip we will always remember,” stated Crystal.
— Submitted by Crystal Waddell