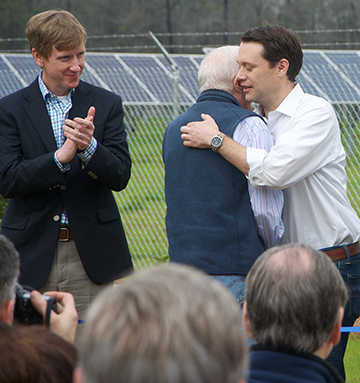 PLAINS — The official ribbon was cut on Wednesday at a new solar energy project sited on farmland owned by former President Jimmy Carter.
The 10-acre site is being leased by Carter to SolAmerica for development of the 1.3 MW solar project, which will provide over 50 percent of the power needs of the City of Plains.
SolAmerica co-founder and executive vice president George Mori opened the 45-minute program held under a dreary winter sky. He introduced Plains Mayor Pro Tem, Wade Medlock, who welcomed everyone. He also introduced other members of the SolAmerica. Also recognized were partners on the project: Jem Morris, Georgia Power; Jamie Barbour, Georgia Public Service Commission; Frank DePew, president, Urban Grid Holdings, leading solar investment firm based in Maryland; and representatives of the Bank of North Georgia.
Mori said the project size in 1.3 mega-watts, the full capacity of the panels. There are 3,852 solar panels total at the Plains site. The project tracks the sun daily from the east and the panels track to the west, then reset themselves after sundown.
“At peak production … the project will supply over 50 percent of electrical energy for the city of Plains,” he said, adding that they expect the project to produce 2.4 million kilo-watt hours per year, “enough solar power to power 200 homes … ”
Mori said the project requires very little maintenance and no fuel costs. Georgia Power is purchasing the power generated under a 25-year Power Purchase Agreement. He expects the project to continue to produce clean energy for the next 35 years or more for the local grids and increase tax revenue for Sumter County.
“Our company fully expects … projects like the one in Plains to become standard around the country in the coming years. It just makes sense, economic and environmental,” he said.
The project was constructed over a three-month period.
Mori also pointed to Carter’s speech in April 1977, addressing the energy policy.
“You cited one of the key principles, that ‘We must start now to develop new, unconventional sources of energy we can rely for the next century.’ As evidenced by this project, your hometown of Plains and we are well on our way to realizing your vision … ”
Jay Hakes, energy expert and author, who also served in the Energy Department during the Carter-Mondale administration, also spoke.
Jason Carter, Jimmy Carter’s grandson, introduced his grandfather, who was wearing a SolAmerica fleece.
T

Former President Jimmy Carter and his wife Rosalynn, at center, participated Wednesday in the ribbon cutting of the SolAmerica solar energy project on the Carters’ farm. S

he former president told the crowd of about 100 that he first became acquainted with renewable energy when he was 11 years, and growing up on his family’s farm in the Archery just outside Plains. They had neither electricity nor running water in the house. When he was elected president in 1976, he was eager to see more renewable energy sources for the country. When he first went to Washington, he said, there were 33 agencies dealing with energy in the federal government, so he created the Energy Department (as well as the Education Department).
“When I was in the White House, as you well know, there were a lot of economic problems around the whole world, but during my administration … we had a great increase in new jobs … a lot of those new jobs came from renewable energy. … We have made a lot of progress … When President George W. Bush came into the White House, he installed 167 energy panels … and later, under President Obama, about 100 more.”
He said the 32 panels he installed on the roof of the White House were removed by President Reagan in 1986, and were acquired by Unity College in Maine, which the university president bought to as a fundraising project. One of those panels can be seen in the Carter Presidential Library in Atlanta, and another in the lobby of a Chinese manufacturer of solar panels in China.
“This has been a very exciting project for me, obviously,” Carter said. “One of best things about it is, as a farmer, we used to rent this land for $35 an acre. The last crop we had here was soybeans and we tried to plant peanuts but this is the hardest ground I’ve ever seen … [the project] is a very good thing for a farmer because you know how farmers make a living now is renting the land for windmills … We get paid $500 an acre here for this land per year … ”
The sun broke through the clouds as the former president spoke.
Jimmy Carter has a legacy as an advocate and leader of renewable energy. He created the Department of Energy and Federal Energy Regulatory Commission (FERC) during his administration, and signed the Public Utility Regulatory Act (PURPA), all catalysts for the advancement of renewable energy in the U.S.