MICHAEL MURRAY I ATR: Southland’s Calyn Fort takes it to the bucket during the Lady Raiders’ home match-up against Valwood on Feb. 7.

The Lady Raiders have had some tough luck in the waning season, but the Southland girls were able to make up some lost ground recently with a defeat of the Valwood Lady Valiants.
The Lady Raiders suffered a tough defeat to the Tiftarea Lady Panthers on Jan. 31 before seeing a similar result in the team’s Feb. 3 match-up against Deerfield-Windsor.
Southland’s girls took a 56-23 defeat in Chula to the Lady Panthers before heading to Albany the following Friday to battle Deerfield-Windsor’s Lady Knights. Despite an admirable effort, the Lady Raiders fell 43-40 in the Albany match.
The Lady Raiders returned to their own hardwood on Feb. 7 to face the Lady Valiants, improving their record with a 52-37 win in the tilt.
At the conclusion of this series, the Lady Raiders slid to 15-8 overall and 3-4 in Region 3-IAAA. 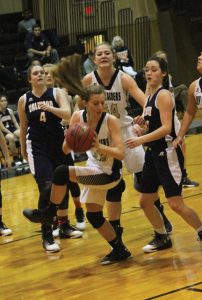 MICHAEL MURRAY I ATR:
Southland’s Sydney Payne pulls in a rebound during the Lady Raiders’ Feb. 7 match against Valwood in Americus.

Kathleen Kinslow was the only Lady Raider to hit double digits in the Jan. 31 match-up, with 12 points. Macy Williams followed with seven points, six rebound, and four blocks. Savanna Banks added another six points alongside nine rebounds and three blocks while Calyn Fort contributed six points and four rebounds.
In the team’s Feb. 7 match-up against the Lady Valiants, Kinslow again led the team with 19 points, eight rebounds, and six steals. Banks tacked on eight points, five rebounds, and three blocks while Fort tossed in eight points.
Cassi Bass added six more points and five steals while Sydney Payne put six points on the board and came down with three rebounds.
Southland’s ladies saw their final regular season opponents on Feb. 10 when the teams traveled to Thomasville to take on Brookwood School. The results of this match were not available at press time.
The Region 3-IAAA tournament is scheduled to begin on Feb. 17 at Darton College in Albany.