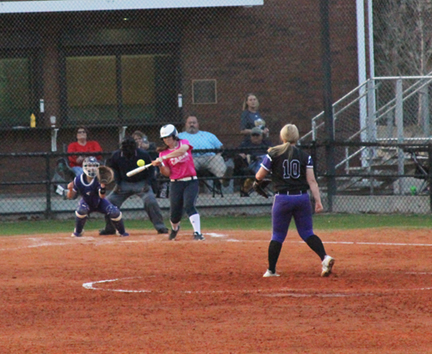 MICHAEL MURRAY I ATR: GSW’s Haley Tierce, pictured above, hit a pair of homeruns in the Lady Hurricanes’ opener against Middle Georgia State on Feb. 14.

AMERICUS – The Georgia Southwestern State University Lady Hurricanes softball team earned themselves a special Valentine’s Day surprise on Feb. 14 at Lady ‘Canes Field in Americus. In a double-header against Middle Georgia State (MGS), the Lady Hurricanes opened the action with an 8-3 defeat of the Lady Knights before taking a 3-2 victory in the afternoon’s closer.
With the pair of wins, the Lady Hurricanes jump to 3-5 overall on the young 2017 season.
GSW’s Haley Tierce was on fire for the Lady Hurricanes, slugging the first of her two-RBI homeruns in the initial frame. Tierce’s ‘round trip  in the bottom of the first plated Ella Hawkins and opened the game’s scoring.
In the bottom of the second the Lady ‘Canes scored three more runs. Hannah McCain scored off a single from Hawkins before Hawkins and Mikela Barlow both scored off a single from Joshlyn Martin.
Middle Georgia broke their silence with an RBI double in the third to narrow the deficit to 5-1.
Tierce added her next two-RBI homer in the fourth inning, this time scoring Barlow.
MGS scored two more runs at the top of the sixth off a double down the left line and from a single to right field.
Barlow scored her third run of the game off a single from Allee Denney to give GSW the five-run win.
Barlow and McCain both went 3-3 at the plate.
GSW finished with 16 hits, eight runs, eight RBIs, and no errors.
Shannon Gibson (W, 2-2) pitched seven innings, faced 31 batters, had seven hits, three runs, walked four and struck out two.
In the teams’ second match-up of the afternoon, the Lady ‘Canes recorded all of the runs that they would need in the first inning.
Hawkins opened the action, scoring on an error. Barlow scored off a single from Denney and Denney then reached the plate off a single from McCain.
MGS scored two in the sixth and almost tied the game, but Brittany Childs came in to pitch and struck out their last batter to end the inning and cinch the win for GSW.
GSW finished with five hits, three runs, two RBIs and two errors.
Kaley Sikes (W, 1-1) pitched 5.2 innings and faced 26 batters. Sikes gave up five hits and two runs while walked three batters and striking out six.
Brittany Childs (Sv, 1) pitched 1.1 innings and faced six batters. Childs gave up two hits and no runs. She struck out two batters and walked none.
The Lady ‘Canes are home on Feb. 18 to host Emmanuel (Ga.) at 3:00 and 5:00 p.m.