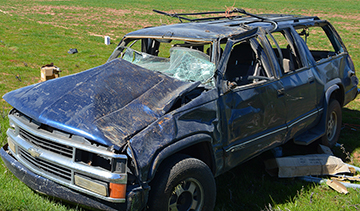 SUBMITTED BY SUMTER COUNTY SHERIFF’S OFFICE This is the vehicle involved in the wreck on Ga. Highway 49 South shortly after lunchtime Friday. 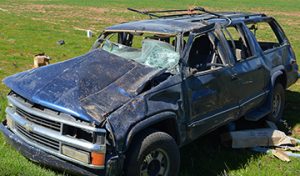 This is the vehicle involved in the wreck on Ga. Highway 49 South shortly after lunchtime Friday.

According to a source with the Sumter County Sheriff’s Office, which was also on the scene, the wreck occurred between and 1 and 1:30 p.m. Friday when the vehicle, traveling south, left the roadway and overturned several times. 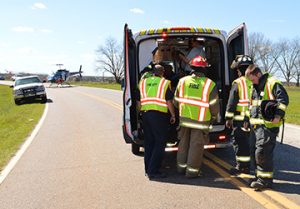 Personnel with Sumter County Fire & Rescue load one of the accident victims into a Gold Star ambulance for transport to Phoebe Sumter Medical Center, while an Air Evac helicopter in the background awaits another victim for transport to a Macon hospital.

There were two people in the vehicle and one was ejected. One victim was walking around following the accident, according to the source, and was taken by Gold Star EMS to Phoebe Sumter Medical Center.
T 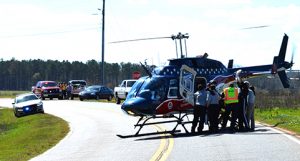 One of the accident victims was ejected from the vehicle, and was airlifted to a Macon hospital Friday.

he other person, who was ejected from the vehicle and could not move without assistance, was airlifted to a Macon hospital.
Sumter County Fire & Rescue was also on the scene.
No further information was available as of press time.

Americus Civil Rights Center to be located at historic…