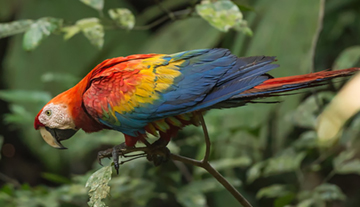 As many of my followers know, I spent most of January in Ecuador hoping to see and photograph some of the 1,600 bird species known to inhabit this diverse country that’s roughly the size of Colorado. Home to some 82 volcanoes, Ecuador ranges from sea level to over 20,000 feet. The Andes Mountains are steep, rugged, and clothed in a botanist’s dream of trees, vines, bromeliads, orchids, and of course, clouds.
Along the Napo River in the Amazonian Rainforest section of Ecuador our group stayed in the thatched-roof huts of Sani Lodge for four nights. Our native guide, from the Sani tribe, took us one morning to a clay lick within the Yasuni National Park to see Scarlet Macaws up close and personal. The vividly colored Scarlet Macaw was a species I had on my bucket list.
Settling into our building that served as our blind I baptized myself in mosquito repellant. I wondered if the repellant wasn’t actually an attractant as I watched a platoon of mosquitoes drill right through my clothing and into my skin. Fortunately, I had taken malaria prevention medication earlier. Our guide whispered something in Kichwa, the local language, to the other guides present.
“It will be worth the pain and suffering,” I told myself, to see such a bird adorned as brightly as a rainbow and one I had longed to see in its natural habitat. But could I be still and quiet long enough to not bring undue attention to myself by swatting at the enemy?
The loud, raucous calls of the Scarlet Macaws could be heard from great distances high in the forest canopy as they cautiously made their way closer and closer to the clay lick. But what exactly is a clay lick, you may ask.
Parrots, parakeets, and macaws will intentionally ingest mineral-rich soil to aid in the digestion of many of the toxic fruits they eat. They’ve been doing this for eons and know exactly where to find these areas. Birders refer to these sites as clay licks. Think of cattle licking a salt or mineral block and you get the idea.
They say time flies when you’re having fun. But when multiple mosquitoes are attempting to devour you, time slows to a crawl. Fortunately, our local guide carried a machete to defend us from the larger mosquitoes. A few medium-sized mosquitoes attempted to connect an IV to one of the tourists before their efforts were discovered and halted.
After two hours of calling and staging themselves, the macaws began to assemble high in the trees above the clay lick. Their keen eyes searched every inch for would-be predators such as hawks, snakes, and cougars before their ever so slow descent from the canopy. The birds’ descent was as if they were walking down a set of stairs ever so cautiously, pausing, keenly aware, always looking, always watching. Now visible, the macaws caused me to temporarily forget the blood letting going on in my body from these descendants of vampires — mosquitoes. I was mesmerized as a Scarlet Macaw dropped to the clay lick and began eating the soil. Then a second, third, and fourth bird joined the banquet. The birds dropped their heads to feed, then raised their heads to swallow in a well choreographed routine.
The only sounds were the birds and camera shutters firing as we savored the moment some 40 feet away. The event lasted perhaps 15 minutes as Orange-cheeked Parrots joined the macaws. By now the trees were alive with hundreds of birds including Cobalt-winged Parakeets. The noise of hundreds of birds was so loud if this clay lick had been located in the United States, our EPA would mandate observers to have hearing protection.
Finally, our joy at seeing these beautiful birds was shattered as a herd of 30+ White-lipped Peccaries, a mammal closely related to pigs, moved in to enjoy the mineral rich soil. As the birds flushed into the safety of the trees I wondered if any of us would require a blood transfusion to return to the safety of our thatched-roof hut we called home in the eastern portion of Ecuador known as Sani Lodge.