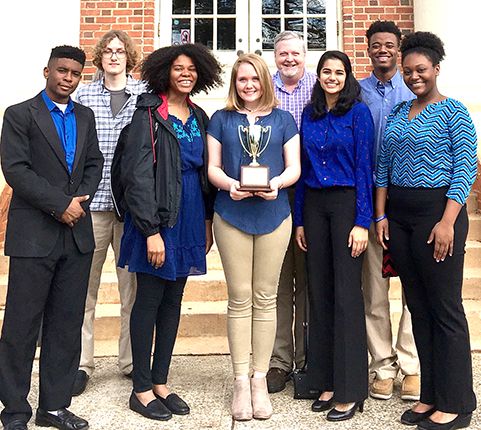 AMERICUS — Before the Academic Bowl, an annual event hosted by the National Park Service at the Jimmy Carter National Historic Site, students from other schools in the region were practicing with flash cards or studying notes in preparation for the competition. But for the winning team from Americus-Sumter High School, their preparation had taken place during the last four or five years.
“Since the eighth grade in the Sumter County Schools, we’ve had really good social studies teachers,” said junior, Charlotte Schopen-Davis. “Our teachers have prepared us well.”
The Americus-Sumter team went undefeated in the double-elimination preliminary rounds against teams from Schley County, Northside in Warner Robins, Warner Robins High School, The Westfield Schools in Perry, Marion County, Deerfield-Windsor School, and Furlow Charter School. In the championship rounds, Americus-Sumter faced off against the team from the prestigious Deerfield-Windsor School, who had come up through the ranks of the losers’ bracket with only one defeat.
Deerfield beat Sumter in the first round, giving each side one loss. The deciding match was then tied seven to seven when the sudden death question was asked: “What was Georgia’s rank in the order that states ratified the U.S. Constitution?”
Students who knew, or thought they knew the answer, had to respond by pressing a buzzer with their thumb. Americus-Sumter senior, Melvin Wiggins, who came up with the winning response, said it seemed like an eternity between the time he pressed the button and the time the light went on.
“I kept pushing and pushing and it didn’t seem like it was going anywhere,” said Wiggins. “Actually, I didn’t notice the light was already on. I finally was able to call out the answer. Georgia was the fourth state to ratify the U.S. Constitution.”
Wiggins again gave credit for his knowing the answer to his teachers, most recently Advanced Placement U.S. history teacher, Lee Kinnamon who was also the coach of the team. Kinnamon provided a context for the number by explaining that Georgia was in a vulnerable position at the time and would have benefited in various ways from the strength of the new national government under the Constitution, and hence more readily supported its ratification. This helped Wiggins retain that information. Providing a broader context for historical facts is one of several methods Kinnamon uses to inspire his students.
“He puts U.S. history in a local context as well,” said Schopen-Davis. “When we learned about the U.S. during the 1820s and 1830s, he talked about what was happening here in Sumter County during that period. He tied local events to national events.”
Kinnamon is also keen on using primary sources instead of relying solely on what the text book has summarized about each period.
“We recently read an excerpt from Alexander Hamilton’s ‘Report on the Subject of Manufactures,’ basically an outline of his economic vision for the new nation, so we could read his own words and understand more deeply his plan,” said Schopen-Davis.
It’s the type of teaching that inspires students to look beyond what is taught in the classroom. This intellectual reach started at an early age for Jasmine Dew, a junior. There were questions at the match with answers beyond the scope of their classroom instruction, but that she, and other teammates, were able to answer anyway.
“I was very fond of history and I tended to look up information beyond what they were asking for in class,” Dew said. Along with Kinnamon, she cited — and the other students concurred  that their love of history was nurtured by a number of teachers, including eighth-grade Georgia studies teacher Nathelma Maxwell, Ninth Grade AP world history teacher Janet Callier, and 10th-grade AP government and politics teacher Calandra Parker.
“This, again, just shows that a quality education is here for the taking at Sumter County Schools,” remarked Americus-Sumter High School principal, Kimothy Hadley. “You can go as far as you want to go with all that is available to you here.”
Of interest might have been the conversation at the Schopen-Davis household that evening after the match. Charlotte’s mother, Irmgard Schopen-Davis, chairs the Humanities Department at Deerfield-Windsor School and was the coach of that team.
— Submitted by Sumter County Schools