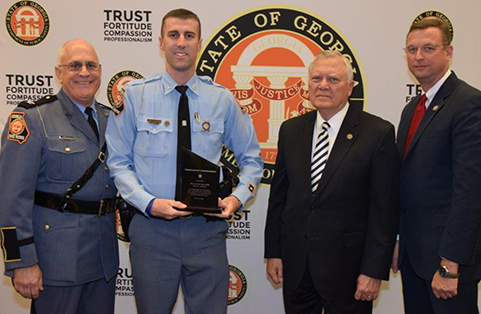 ATLANTA — The Georgia State Patrol hosted its 99th Trooper School Graduation and the Department of Public Safety Awards Ceremony on March 11 at the Hilton Airport Hotel in Atlanta.
TFC Alec Mitcham Davis No. 263 (Post 10-Americus) received the Commissioner’s Commendation award. Davis initiated a vehicle pursuit in October 2016, that led across Sumter County and ended after the suspect crashed his vehicle. Davis and the violator struggled after a foot pursuit. Davis received a broken bone in his right hand while taking the violator into custody.
In the commendation, Davis was lauded for demonstrating perseverance in this struggle through unrelenting sacrifice to execute an arrest despite the fact that he had sustained a personal injury. His devotion to duty is to be commended and demonstrates the pride Davis displays while carrying out his duties as a Georgia State Trooper.