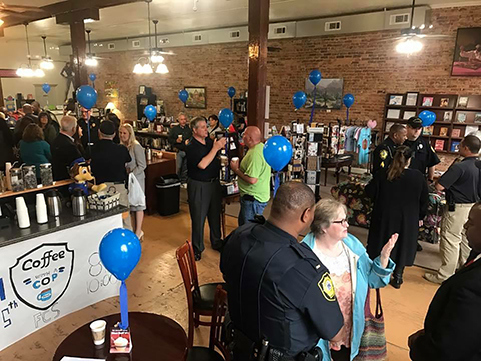 Citizens and law enforcement alike turned out for the first Coffee With a Cop event held Wednesday at Bittersweet, downtown.

AMERICUS — On Wednesday morning Bittersweet Bookstore and Coffeehouse in downtown was the location of Americus’ first ever Coffee with a Cop program.
Coffee with a Cop is a nation-wide community outreach program that allows citizens a chance to meet with the local law enforcement officers that protect their city. Events like these are important, because they make the job easier for the police. Tom Harrison, a local resident who moved here from California two years, organized the program here in Americus. The event ran from 8-10:30 a.m. and despite stormy weather, there was a huge crowd at Bittersweet the whole time. In fact, parking downtown was at a premium.
The store was decorated with streamers and balloons to show support for the officers, and the students at Furlow Charter School had made a banner for the event. The Americus Police Department, the Sumter County Sheriff’s Office, and the Georgia Southwestern State University  Office of Public Safety all sent several officers to the event, but they weren’t the only law enforcement officials there. The Georgia State Patrol Post 10 and the Georgia Bureau of Investigation Region 3 Americus Offive also had representatives who showed up.
Everyone was friendly and they all seemed like they were excited to meet the officers. The discussions ranged from the best ways to improve the town, to how to make the best cup of coffee. There was even a minor argument over where to get the best chili dogs in the area, but unfortunately no one was able to come to an agreement on that important issue.
The citizens of Americus showed an overwhelming amount of support for their local law enforcement, and the law enforcement officials were honored to have been there. Every officer mentioned how happy they were with the event, and how they enjoyed the opportunity to engage with the public in a positive situation.
Americus Police Chief Mark Scott, seemed particularly impressed with the turnout for the event. Tom Harrison said he was “thrilled that the community came out in spite of the storm.”
Other such events will be planned for the future so that local citizens can talk with local law enforcement in a hospitable atmosphere.