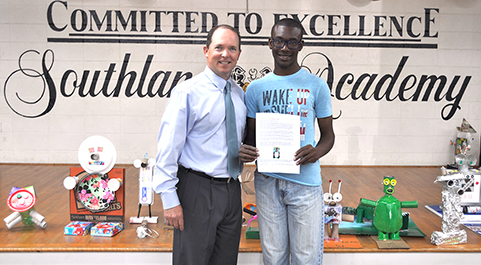 Kaylon Holt displaying a ‘thank you’ and notice of reaching 1,000,000 in his pop top collection. Also shown is Southland Headmaster Ty Kinslow. Holt began this endeavor as a fund-raising effort for a friend’s father, who had cancer. He decided to broaden his efforts, selecting the Ronald McDonald House in Columbus for its efforts on behalf of families of critically ill children. He received assistance from a wide variety of community resources, including Perry Wellness Center peers and staff, nursing students at Georgia Southwestern State University, Southland Academy students, and merchants ranging from a local McDonalds to Dent Hardware in Buena Vista.