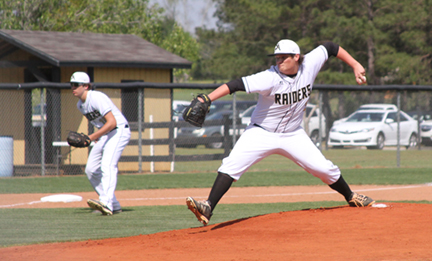 MICHAEL MURRAY I ATR: Southland’s Michael Hudgens winds up to send a Tiftarea batter back to the dugout as Harrison Bell, at left, prepares to spring into action on April 11 in Americus.

The Southland Academy Raiders baseball team picked up an exciting 1-0 win over the Crisp Academy Wildcats on April 10 before taking on the Tiftarea Panthers in a pair of matches on April 11 and 13. The Raiders took a pair of tough Region 3-IAAA losses to the Panthers in the waning 2017 season.
Southland’s crew bounced back on April 18, grabbing a 12-6 win over the Brookwood Warriors in Thomasville to keep their hopes for a spot in the Region 3-IAAA playoffs alive. The Raiders hosted Brookwood on April 21 for their final region match of the season. The Raiders won that tilt 11-1.
In the Raiders’ April 10 victory over Crisp Academy, three pitchers, Hunter McCain, Will Hubbard, and Michael Hudgens combined to throw a no-hitter. Following the win, Southland head coach, John Brady, told the Times-Recorder that this was only the second no-hitter that he has seen in his career with the Raiders.
McCain went three innings on the hill for the Raiders. Hubbard then came in to pitch two and two-thirds innings before turning the mound over to Hudgens.
McCain struck out five batters and walked one. Hubbard sent one batter back to the dugout and walked two. Hudgens dispatched two batters and didn’t walk any.
“It was a pretty good job by those guys,” Brady told the Times-Recorder. “They threw strikes… The defense played very well. It was a good baseball game.
The game’s only score came when George Wall hit a single and stole second base in the first inning. Wall then advanced to third base on a wild pitch and McCain drove him in with a sacrifice fly.
Southland collected nine hits in the match.
Wall hit two for three for the Raiders with one run scored and one stolen base. McCain hit one for four with one RBI. Tyler Kennedy connected on one hit. Will Hubbard batted two for two with a stolen base and a walk.
Clay Owens was one for three with a double.
“That was one of the harder-hit balls…,” said Brady, on Owens’ double. “We had a couple of runners in scoring position. A kid jumped up and made a great catch. It would have been nice to get those two runs in for a little cushion, but it is what it is. It was a good game.”
The following day, the Raiders hosted the Tiftarea Panthers, taking a narrow 4-3 defeat despite a late rally that nearly saw the hosts turn the game around.
“It was a tough loss because we were so close,” Brady said.
Wall hit one for three in the tilt. Bell hit one for three with a pair of RBIs. Luke Law brought in the Raiders’ final RBI on his sole connection of the match. Hubbard crossed the plate twice and Owens scored once.
Hudgens pitched three innings for the Raiders before ceding the mound to Bell, who finished out the game.
Hudgens struck out two batters, giving up three hits and no walks. Bell dispatched two batters, gave up two hits, and walked one.
Two days later, the Raiders hit the road for Chula for a chance to tie the season series against Tiftarea.
The Raiders took a 9-6 defeat in the match.
The Raiders jumped ahead early, scoring a pair of runs in the second frame when McCain opened with a single. Hudgens followed with a single and Stephen Barnes sacrificed both runners ahead. Hubbard then came through with a big two-out hit to drive both runners in. Tiftarea added their first run in the bottom half of the inning and two more in the third to take the lead.
In the top of the fourth, Southland tied the score 3-3 when Hudgens drew a walk and designated runner, Landon Law, stole second base.
Kennedy followed with a triple to drive in Hudgens, but the Panthers continued their offensive onslaught and gradually pulled ahead over the following four innings.
The Raiders narrowed the gap to 5-4 in the top of the fifth when Wall drew a walk and completed his round trip on a Bell double, but the Panthers took off for three-runs in the bottom of the inning to pull away for good.
Wall scored two runs, drew one walk, and crossed the plate twice. Bell hit two for four with a double and a homerun. Bell contributed three RBIs. McCain tagged the late once. Hudgens hit one with two runs scored. Kennedy contributed a triple and an RBI. Hubbard contributed two RBIs on his only hit of the contest.
Southland will return to action on April 24, hosting the Southwest Georgia Academy Warriors.

Wildcats wrap up regular-season 25-2, roll over Cougars for…