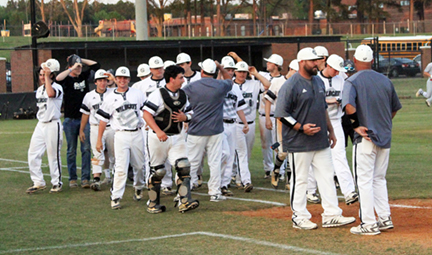 MICHAEL MURRAY I ATR: Members of the Wildcats and the team’s coaching staff celebrate after winning a mid-season tilt against Lee County.

COLUMBUS – The Schley County Wildcats baseball team won their second straight Georgia High School Association Region 4-A championship on April 21, traveling to Columbus to take on the Brookstone Cougars for the winner-take-all match-up.
The Wildcats fell behind early in the region title match, but utilized three very productive innings late in the game to pull ahead for good and, eventually, earn the region crown.
With their 7-3 victory over the Cougars, the Wildcats wrapped up region competition with an impressive 26-2 overall record. The Wildcats didn’t lose a single one of their 16 Region 4-A contests.
Following the defeat, Brookstone dropped to 19-11 overall and 12-3 in region play.
The Cougars came out early in the 4-A title tilt, putting the game’s first run on the board in the bottom of the initial inning.
The scoreboard fell quiet through the following three innings before the Wildcats broke their silence in the top of the fifth frame to plate one runner and tie the score 1-1.
After building up some steam in the fifth inning, the Schley crew carried this energy into the top of the sixth, adding two more runs to take a 3-1 lead. That same momentum propelled the team into the seventh inning, when the Wildcats pulled ahead for good, adding four more runs.
The Cougars got a bit of a rally started in the bottom of the seventh, but a strong defensive effort from the Schley squad halted their efforts after two runners came in, clinching the win for the visitors.
In total, the Wildcats collected 11 hits in the championship game while holding the hosts to only eight.
Chase Patrick handled hurling duties a total of six innings before turning the mound over to Ashton Goodin and Clint Sellars, who split the final frame.
Patrick sent seven batters back to the dugout while Goodin dispatched one in less than one inning of work.
Wade Law and Cameron Belcher each accounted for three of the Wildcats’ hits in the tilt, with Law contributing three RBIs to the win. Patrick and Jake Hall both added one RBI.
With the ‘Cats’ impressive record, the team is situated squarely at the top of the GHSA Class A-public power rankings. As a result, the Wildcats will enjoy a valuable bye week in the first round of the 2017 state tournament, scheduled to begin on April 28. Following this well-earned break, the Wildcats will kick off their participation in the state tournament on May 4 in Ellaville. Schley’s opponent in this series is yet-to-be-determined.