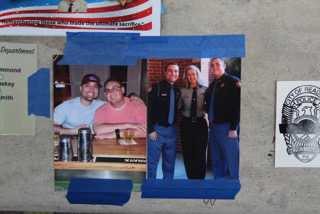 ROSEMARY SCOTT: Photos of Nick Smarr and Jody Smith, who lived and died together, were place near their names on the Memorial Wall.

WASHINGTON — The National Police Survivors’ Conference, sponsored by Concerns of Police Survivors, or C.O.P.S for short, took place this past weekend in Washington, D.C. The families and friends of fallen officers from across the nation were invited to come together in one place to be honored, supported and guided through their grief by both other survivors and the nation’s top officials. Among them were the families of Americus natives Nick Smarr and Jody Smith, who fell in the line of duty five months ago.
Immediately upon arrival, the families were greeted and escorted off the plane by police officers from all over the world. These officers came to the capitol to celebrate National Police Week, and as the families stepped off the plane, they stood at attention to show respect for them as well as to honor the fallen. Among them was Douglas Dewey, a Youth Engagement Officer from Hillingdon, London. 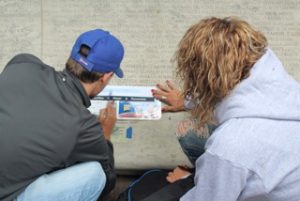 “We recently lost an officer in central London, so what the families must be feeling feels very real to us,” Dewey said. “That’s why we’re here — to honor the lost and to participate in the events as well.”
The families arrived on both Thursday and Friday, and after receiving a police escort to their hotels, were invited to attend a ceremony at the National Law Enforcement Officers Memorial. There, the families could find their fallen officer’s name engraved on the memorial, trace the name on paper as a keepsake, and place photos and wreaths around the place where the name could be found.
Also at the memorial was a parade made up of thousands of bikers riding hundreds of miles for the fallen officers. There were four officers riding specifically for Smarr and Smith — they even met with the families to share in their grief and offer their condolences.
Doug White, a sergeant from Hillsborough County Sheriff’s Office in Tampa, Florida, was one of them. He heard about Smarr’s and Smith’s story through Facebook, and was so moved by it that he knew he had to honor them. He rode for both of them as well as an officer who fell from his own department last year.
“I rode for Nick and Jody because their story is a complete testament to valor, sacrifice, and the very truest tenants of our profession,” White said. “The way they touched the lives of the people around them only brought value and quality of life to those who loved them most. Their dedication to one another can be summed up in Nick’s last words, ‘Hang on Jody, I got you man, I got you man.’ They fought to the end.”
The next day, the survivors were invited to attend a candlelight vigil in honor of the fallen officers on the National Mall. There, speeches were given by some of the United States’ top representatives. Among these were Jeff Sessions, the nation’s Attorney General; John Kelly, the Secretary of Homeland Security; and John Ashcroft, the former Attorney General under the George W. Bush administration. All speakers took care to honor the fallen, give their condolences to the families affected, and ensure that the lives lost will not be forgotten.
Following their speeches, the name of each fallen officer was called by a representative from their state, as the families who represented them were encouraged to stand and be recognized. To close the ceremony, the colors were presented while candles were lit in honor and remembrance of the late officers. 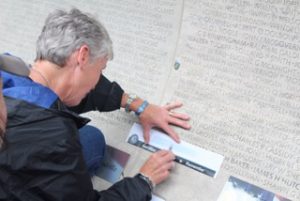 Janice Smarr, mother of Americus’ Nick Smarr, said that the event was an emotional experience that, at times, was difficult to endure.
“Seeing my son’s name on the wall [of the memorial] was very hard for me. I don’t like knowing that he is gone forever out of our world,” Smarr said. “It is the hardest thing I have ever been through.”
On Sunday, the survivors were invited to a lunch in which Sheriff David Clarke of Milwaukee County, Wisconsin, spoke in remembrance of the officers. His speech was extremely pro-law enforcement, which was appreciated by both the family members and officers in the crowd.
Though most of the attendees of the luncheon were largely divided into loved ones and coworkers of the fallen officers, some individuals represented both groups. Michelle Jedlo, an officer with the Amtrak Police Department in Chicago, lost her boyfriend, a fellow officer, last year.
“Police Week has been an emotional experience, as I get to meet others who are grieving and in similar situations,” Jedlo said. “I have felt nothing but support and welcome here.”
Each event was set up in order to prepare the families for the largest event: the 35th Annual National Peace Officers’ Memorial Service on the capitol lawn. Speakers during this event included both President Donald Trump and Vice President Mike Pence.
While the speakers of every event had encouraging words for the families and officers present, the President’s speech seemed to have the most crowd response. Trump said that he appreciates the efforts of law enforcement, and he condemned those who do not.
“I will always support the incredible men and women in law enforcement as much as you have supported me,” Trump said in his speech. “The attacks on police … are a stain on the very fabric of our society.”
After his speech, the name of each officer was called again, and the families and friends came forward to place a red carnation on a wreath to be placed at the memorial. Though the weekend was not yet finished, this act symbolized the final act of remembrance that the organization had to offer.
Sharron Johnson, the mother of Americus’ Jody Smith, said that the ceremony put her through a range of emotions.
“You’ll see us laugh, you’ll see us cry, and you’ll see us smile, but one mention of our sons and the tears will come,” Johnson said. “I’m sure it’s like that with everyone.”
After the ceremony, many families went back to the memorial to see and trace the names of the fallen one last time. The events came to a close with a picnic that all families were invited to attend. There were no speakers or formalities at the picnic; instead, the families and friends were encouraged to fellowship with one another and reflect on the events past.
Throughout the week, the survivors were given the choice to attend small support groups with other families in similar situations. The sessions, combined with the events, were intended to provide all of them a backbone of support that they may not have found otherwise.
“It’s really overwhelming, but also positive because I’m surrounded by families in the same shoes I’m in,” Johnson, who is also a law enforcement officer, said. “We are all moving on because we have no other choice. God gives us strength, and he’s what keeps us moving forward.”
Janice Smarr agrees with Johnson in that the experience has been one that helped her family with their grief, and she thanked the holders of the event for what they have done to aid all the participants.
“C.O.P.S has done everything to make this an experience that we will never forget,” Smarr said. “As we are off to go home today, we will never be able to thank C.O.P.S enough for what they have done for us. From my family, we say thank you so much for letting us have this experience.”
The families were flown back to Americus on Wednesday, and will continue to celebrate National Police Week at home.

Fire chief to retire after 44-plus years