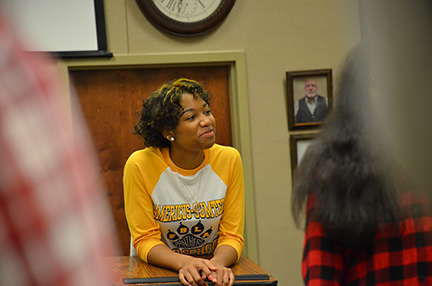 SUBMITTED BY SUMTER COUNTY SCHOOLS: Kaniya Little, who just graduated from Americus-Sumter High School, was one of the students on the Student Leadership Team.

AMERICUS — A group of potential leaders from the Sumter County School System have been meeting with the superintendent to hone their leadership skills and represent their schools in presenting concerns and issues relevant to the student body. They are called the Student Leadership Team.
“The purpose of the program is to further enhance and develop these students’ leadership attributes and qualities,” said Sumter County School Superintendent Torrance Choates, who has been meeting with the students since February of this year. “The program should ensure the students will graduate from college through meaningful discussions, skill building, and continuous positive engagements and interactions.”
The students often talked about the characteristics of good leadership.
“You shouldn’t exclude people because you have a certain title,” said Kennedy Smith, a student at the Sumter County Ninth Grade Academy. “You have to listen to feedback and realize you are part of an organization, that it’s not just you.”
The importance of feedback in the development of leadership was a sentiment echoed by fellow Ninth Grade Academy student, Bentlee Roberson.
“A lot of people listen to speak, but they don’t listen to listen,” said Roberson.
Three students per grade were chosen from the 6th grade to 12th based on their possessing characteristics of a good leader such as leading by example and being able to articulate themselves.
The students also engaged in a variety of leadership-building exercises, like naming three people who inspired them who they’d want on their journey for success.
Many found their sources of inspiration close to home, like Americus-Sumter County Junior Nallely Lepiz.
“My mom and dad came from a very low place and made their lives into something,” she said, describing their journey from a small town in Mexico to legal immigration in the United States and citizenship. “They always told me, ‘do better than we did.’”
Likewise, Roberson also drew inspiration from her parents.
“My dad didn’t have a great start in life,” she said. “Then, his stepdad showed him how to grow a business from the bottom-up. My mom and dad have worked together since before college. It inspires me to create my own business.”
Prerana Kumar, a junior last year at Americus-Sumter County High School, drew inspiration from a variety of sources, from Albert Einstein to Thomas Jefferson to Professor Albus Dumbledore in the Harry Potter books, to Senator Elizabeth Warren. Siting the leadership potential of women, Kumar added, “If you want something said, ask a man. If you want something done, ask a woman.”
Choates also offered his own advice for good leadership. “If you write your goals down and read them every day, you’re going to go somewhere,” he said.
Students also had a chance to talk about issues relevant to their academic careers. Americus-Sumter County High graduating senior, Kahria Hadley opened up a discussion about the advantages and disadvantages of taking open enrollment classes at Georgia Southwestern State University. The program allowed students the opportunity to complete some of their colleges courses while in high school, leading to cost savings and having to spend less time getting a degree.
But to Hadley, that also meant shortening her college experience. “I don’t want to give a big part of the time in life when I am finding out who I am,” she said.