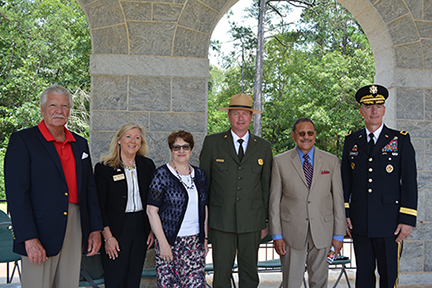 ANDERSONVILLE — America’s military past and present were saluted with tributes of sincere gratitude and poignant stories of courage during the annual Memorial Day program at Andersonville National Cemetery Sunday afternoon.
The historic site was awash in a sea of red, white and blue, an appropriate background for the patriotic service. The program opened with the advancement of Colors by the U.S. Army Maneuver Center of Excellence honor guard at Fort Benning, followed by a solemn benediction led by the Rabbi Beth L. Schwartz of Temple Israel, Columbus.

There were powerful messages of bravery and courage in service to God and country, patriotic music played by the U.S. Army Maneuver Center of Excellence, the solemn laying of wreaths, a 21-gun rifle salute, and the moving refrains of “Taps.”

A warm, gentle, spring breeze unfurled the thousands of American flags — large and small — as master of ceremonies Charles Sellers, National Historic Site (NHS) park superintendent, extended a warm welcome to the crowd of almost 300, who came to pay tribute and celebrate the military men and women who serve today and have served, especially those that lost their lives to defend our freedoms. 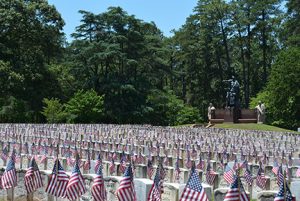 The graves in the Andersonville National Cemetery were marked with American flags to commemorate Memorial Day. The flags were placed by Boys Scouts and other groups.

Sellers pointed out the national cemetery is the final resting place of the more than 21,000 buried there, including the 13,000 that perished while held prisoner during the Civil War. He said Memorial Day is our time together to honor the men and women who serve and have served the nation in the time of war and peace.
Sellers quoted from President Donald Trump’s proclamation calling for everyone to observe Memorial Day (May 29) as a day of prayer for permanent peace, designating citizens across the nation unite in prayer at 11 a.m.
Keynote speaker, Brig. Gen. David A. Lesperance, Armor School Commandant, U.S. Army Maneuver Center of Excellence at Fort Benning, delivered a meaningful talk that began by reading the poem, “In Flanders Field,” the famous World War I poem written by John McCrae composed on the Battlefield in Belgium.
Lesperance pointed out that this year marks the 100th anniversary of America’s entry into World War I, a theme that ran throughout his address.
He paid solemn tribute to all military personnel, especially those who paid the ultimate sacrifice of giving their lives to protect the freedom of our country, and he acknowledged Gold Star family members in attendance, asking that they stand in recognition.
Lesperance reflected on the true meaning of Memorial Day that began as Declaration Day in the post-Civil War era of 1868, and emphasized that its importance not be lost to future generations.
Others on the program were Jim Covington of Americus, president of the Friends of Andersonville, and  U.S. Second District Congressman Sanford Bishop, (D-Ga.) of Albany, both of whom each reflected on the meaning and significance of Memorial Day as well as emphasized the importance of educating today’s youth on the history of our country.
The program concluded with the laying of decorated wreaths presented by representatives of 18 local and area civic and service organizations. Among those from Sumter County were the Friends of Andersonville represented by Melanie Grace; John D. Mathis American Legion Post 2, represented by Leo Roots, sergeant at arms, and Al Foster, chaplain; American Ex-POWs presented by Charles Barr, NPS ranger, Andersonville; and the Daughters of the American Revolution, Council of Safety Chapter, presented by Nancy Hayes, regent, and Gay Sheppard.