Americus Travelers walk away with one win in Perfect Game tourney 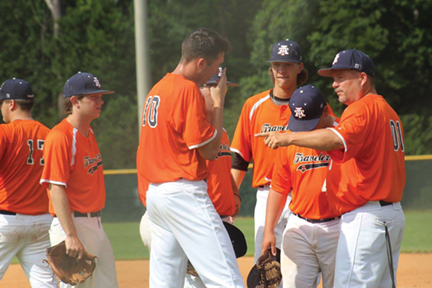 CARTERSVILLE – The Americus Travelers hit the road for the Metro Atlanta area on June 23 to take part in the Perfect Game Super 25 Tournament.
The Travelers played four games in the tournament against talented teams from as far away as Ohio.
The Americus crew saw some tough luck in the tourney, going 1-3 while determinedly playing against some very skilled teams only to see their overall record dip to 8-8 on the 2017 summer season.
The Americus crew opened the tournament on June 23 with a tilt against the Georgia Jackets, dropping a 12-6 decision despite taking an early lead in the contest. The local squad kicked off the scoring in the top of the first frame off of an RBI connection from Cameron Vanlerberghe. The Travelers tossed another run on the board in the top of the third before the Jackets tied the score 2-2 in the bottom of the stanza.
Upon returning to the dugout, the Travelers sparked a rally that would net the team three more runs, giving the Americus crew a 5-2 edge.
The Jackets responded with a rally of their own which produced seven runs for the “home” team and put them ahead for good. The Georgia Jackets added another trio of runs in the bottom of the fifth before fending off the Travelers’ comeback efforts in the top of the sixth, allowing only one run, and clinching the six-run victory.
The Travelers saw several hurlers take the mound in the tilt, with Tyler Ross and Will Lanneau each striking out a pair of batters. Tyler Harrell struck out one batter.
Will Lang, Jarrod Wall, Reid Ragsdale, Gavin Paul and Vanlerberghe each contributed an RBI to the Traveler cause in that match-up.
The Americus squad scattered seven hits in the game.
The following afternoon, the Travelers returned to the diamond to battle the Ohio Force. After another heated battle, the Travelers eventually succumbed to the out-of-state team, suffering a 4-1 defeat.
The Travelers held the Ohio Force scoreless through the initial three frames of the tilt and their opponents responded in kind. In the bottom of the fourth, however, the Ohio Force plated the game’s first runner and followed with by completing three players’ round trips in the bottom of the fifth inning.
In the top of the sixth, the Travelers made their move when Harrell batted in the team’s sole RBI of the match. Despite their efforts to make a comeback, the Travelers were stifled by a hard, defensive push from their foes and eventually accepted the three-run defeat.
Lang and Jarrett Kemp each collected one hit in the tilt.
Paul tossed five innings in the contest, dispatching a pair of batters before ceding the mound to Harrell, who fanned one.
The next afternoon, on June 25, the Travelers dusted off their uniforms and returned to the field, determined to return victorious against the East Cobb Eagles.
The Travelers did exactly that, pulling ahead early and utilizing a fifth-inning rush to earn the team a 7-3 victory.
The Eagles jumped out early, tossing two marks on the board in the initial inning before the Travelers made up for lost ground in the bottom of the second frame, plating three runners.
These runs came on a fielder’s choice off of Jarrod Wall’s bat, an error, and a hit by Ragsdale.
Unwilling to take any chances, the Travelers added four more runs to their tally in the bottom of the fifth inning. A double off of Will Kelley’s bat and a grounder brought in these runners, putting the Travelers up for good and giving the Americus team their first win of the tourney.
Kelley and Lanneau each collected two hits in the game, with Kelley contributing three RBIs.
Ross and Harrell split duties on the hill, with Ross pitching four innings and sending two opponents back to the dugout. Harrell dispatched six prospective batters during his three innings on the mound.
In total, the Travelers connected on seven hits in the match-up while holding the East Cobb Eagles to only three.
For their final match-up of the tourney, the Travelers took on the Mountain Brook High School Spartans, of Mountain Brook, Ala. The Spartans took a 7-4 victory over the Americus crew.
The Spartans got the jump on the Travelers early, opening the scoring with three runs in the bottom of the first. The Alabama team added another in the second frame before the Travelers broke their silence in the third stanza with a run of their own.
Mountain Brook added runs in the bottoms of the third and fifth stanzas (two) before the Travelers kicked off their most productive inning of the game, plating three runners in the top of the sixth.
Their comeback efforts were cut short by the Spartans’ defensive play in the top of the sixth, sealing the win for the Mountain Brook team.
The Travelers connected on eight hits in their final match of the tournament, with Kelley, Lanneau, and Matt Cooper each recording a pair.
Cooper and Kelley both tossed three innings for the Travelers in the tilt, with Cooper putting away four Spartans and Kelley striking out two.
The Travelers will return to action on July 7, hitting the road for Vero Beach, Fla. To take part in the AAU National Championships.