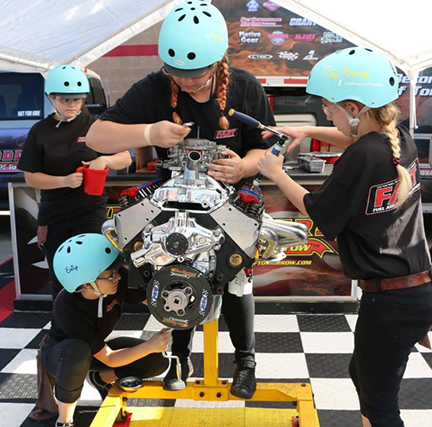 SUBMITTED BY SUMTER COUNTY SCHOOLS: The all-girl engine build team from Americus-Sumter High School must work fast to rebuild a Chevrolet 350 V-8 engine at a competition during the 2016-17 school year in Chattanooga, Tenn. The team won first place out of 22 teams..

CHATTANOOGA, Tenn. – The Americus-Sumter High School all-female engine build team recently won first place in the annual “Coker Tire Cruise-In Invitational” engine building competition in Chattanooga, Tennessee. The event hosted 22 competing teams from high schools all around the southeast, and serves as one of 15 national qualifiers offering a pathway to the national competition in Las Vegas, Nevada.There are more than 200 high school engine build teams across the United States.
“Team Toy Story” is a six-member all-girl team sponsored and trained by ASHS automotive technologies instructor Fred Mohl. The girls competed all year in various engine build competitions around the southeast, and garnered a lot of attention for not having any males on the team. “These girls pride themselves in taking on non-traditional roles,” Mohl said. “And it’s noticeable by the other teams competing at events. As far as I know, we have the only all-girl team in the whole country.”
The ASHS Team Toy Story members are: Tyler Brown, Cayle Crosby, Emily Given, Katti Ingle, Mayke Morsink, and Chaneylynn Smith.
Mohl drove the point home that his all-girl team beat 21 male teams in Chattanooga, with a winning time of 37:20. “I believe this is unprecedented. They did a great job. We are very proud of them.”
The engine build competition is a timed event that involves tearing down a Chevrolet 350 engine and putting it back together following sequences and torque specifications set by the automotive industry. There are 36 pages of rules, and upon completion the team’s time is logged then the reassembled engine is inspected by a team of five judges.
“Everything must come out of the block, including all pistons, except for the camshaft and crankshaft,” said Katti Ingle, a Team Toy Story member.
“The team was penalized six minutes, but they still managed to win first place,” said Mohl.
Each girl experienced a different perspective for the competition.
“Completion time is only one aspect we get judged on,” said Emily Given. “Accuracy and sequence are also big factors,” she added, referring to the rule book.
“It’s not as easy as everyone thinks,” said Cayle Crosby. “You get out there all pumped, then at the end you’re exhausted but relieved. It teaches you how to work with other people, how to push yourself to higher standards.”
Team member Tyler Brown described the physical effects the competition had on her. “Right before the competition, you’re behind the table getting ready. Your heart is pounding and you feel like you could pass out at any second. They start counting down and you don’t have time to think about anything other than running to the engine. After about 15 seconds, it’s ‘game on’ and everything gets serious.”
Chaneylynn Smith said, “Engine build has helped me become a better person, helped me to become more social.”
A major benefit to participating in engine build competitions is the chance to compete for scholarships given by respected schools from around the U.S. Last year nearly $5 million were given to high school teams who competed around the country.