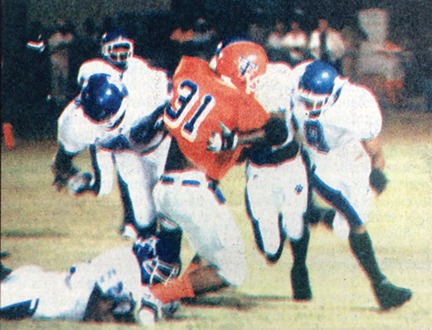 ATR FILE PHOTO TAKEN BY NICK STALLINGS: This photo, titled, “NO YARDS FOR YOU” was originally published in the Americus Times-Recorder on Oct. 22, 2000. The original cutline for the photo reads: The Americus swarming defense pound the Region 1-AA leading rusher from Turner County (31). Stuffing Walker are Felton Johnson (52), Tim Angrish (79), Chad Holt (30), and Kent Margin (8).

Editor’s note:
Regular readers of the Americus Times-Recorder (ATR) will likely recall that the newspaper recently embarked on a journey down “memory lane”, celebrating one of the area’s most recent exciting periods of sporting excellence. This summer, in our “From the Archives” series, we have been exploring the Americus High School (AHS) Panthers’ 2000-2001 football season, in which the AHS crew blew a slew of challengers out of the water on their way to a state championship victory.
In our latest installment of the series, we discussed one of the Panthers’ most longstanding rivalry match-ups up to that point in the year against the Sumter County Rams.
The build-up for the friendly, but fiercely competitive rivalry match had swept the town and, after the dust settled, the Panthers emerged victorious over the previously-unbeaten Rams.
The following week, the Panthers took a hard-earned break before they began preparations to defend their 6-0 record against the Turner County Rebels.

———————-
In mid-October 2000, many sports fans in Georgia were busily wondering if the Atlanta Hawks might be able to turn their luck around and put together a winning season under the guidance of rookie coach, Lon Kruger.
In local news, the Times-Recorder was steadily keeping area residents updated on the hunt for an escaped inmate after three prisoners escaped from the Sumter County jail. Two of the fugitives were located quickly, but the third eluded a concerted effort from local law enforcement for several days before he was recaptured.
Also in local headlines, Sheriff Randy Howard had recently secured the democratic nomination for the upcoming sheriff’s election, in which he would face Bob Ingle. At the same time, hundreds of members of the community were applying pressure to the local County Commission to find a way to cover the county’s expenses without raising property taxes.
In the ATR’s sports section, sports editor, Matthew Brown, was steadily keeping fans in the area up to date on the progress of the Macon County softball team, which had secured a spot in the Elite-Eight round of the state tournament and the Staley Middle School football team, which had earned a 6-0 record on the season and didn’t show any signs of slowing down.
Dominating the sports page headlines during that period, however, was the AHS football team, which was featured in nearly every edition as they continued to roll over their Class AA opponents.
———————-
On October 12, the ATR published an article about another group of talented AHS students, titled, “Panther band takes sweepstakes trophy”.
The piece discussed AHS’ champions in the stands, who had recently traveled to Hawkinsville to compete against bands from all over Georgia for the coveted Sweepstakes Trophy. The AHS band blew the competition away, earning the highest score possible on their way to the victory.
This excitement would carry over to the football stadium the following Friday, when the Panthers were scheduled to travel to Ashburn to battle the as-yet undefeated Turner County Rebels for the right to call themselves the top team in Region 1-AA.
Before the action got going, however, Brown decided to pay homage to one member of the Panther team, in particular.
In an Oct. 18 article titled, “’Unsung’ MVP leads by example”, Brown wrote, “Several players on the Americus High School football team have piled up a high number of touchdowns in 2000. Several players have racked up a load of yards. There are also several players who don’t have any of those kind of numbers, and one who has stood out as perhaps a true most valuable player… Big senior Marcus Campbell, at 6-foot-4 and 280 pounds, has been more than happy to lend a helping hand to those in the more “glamorous” positions. Against Randolph-Clay, he threw a thundering pancake block to free tailback, Franako Smith. Against Sumter County, his wide frame kept a runner trapped up to allow Robert Johnson to make a tackle behind the line of scrimmage.”
He then quoted Panther head coach, Erik Soliday, as saying, “Marcus has had a good year so far on both sides of the football… Offensively, he’s doing a tremendous job blocking. He knows all the assignments. He makes sure everybody’s going to the right places. Defensively, he does his Job the best he can. You can count on him to make plays and always be in the right place.”
The article also quoted Campbell as saying, “The offensive and defensive lines are the main parts of the team even though we don’t get as much recognition as other people. Recognition isn’t enough if you don’t win.”
When asked which side of the ball he prefers to be on, Campbell told the Times-Recorder, “Defense, mostly … You get to hit the other quarterback. I like protecting [AHS quarterback, Robert Johnson].”
The article concluded, reminding local sports fans to look for Campbell on the hardwood later in the year, as he had taken a spot on the Panther basketball team the previous season.
The following day, Brown published a preview of the upcoming action, titled, “Another battle of the unbeaten”. In the piece, Brown wrote, “For the second week in a row, No. 3-ranked Americus High School is faced with a battle of the undefeateds in Region 1-AA. The 6-0 Panthers playing at Turner County may not carry the atmosphere of when Americus played Sumter County Oct. 6, but the game is every bit – if not more – important to Soliday and his players.”
Brown added that Soliday was acutely familiar with the Turner County program, as he had previously coached in that system for eight years.

ATR FILE PHOTO TAKEN BY NICK STALLINGS:
This photo, originally published in the Oct. 22, 2000 edition of the Times-Recorder alongside an article detailing the Panthers’ defeat of the Turner County Rebels, was titled, “TOUCHDOWNS GALORE”. The photo’s original cutline reads: John Harris hauled in 216 yards receiving and three touchdowns in Americus’ convincing win.

He went on to explain that the AHS and Turner teams were tied for first place in Region 1-AA at 3-0 and the winners of the upcoming game would get to claim that honor all to themselves.
He also discussed the fact that, included on the Rebels’ roster, was Class AA’s leading rusher, Jason Walker. The article went on to say that Walker could, potentially, pose a very real threat to the Panthers in the upcoming match-up. Averaging over 150 yards per game, the Turner County standout had already broken the 1,100-yard mark on the 2000 season, and would surely look to be adding more to his tally the following Friday evening.
“With that running game, they’re patient and grind it out, get what they can get and eventually break a long one,” Soliday said in the article. “It’s going to be a good test for us. We haven’t seen a back as big as this kid is. He’s not super-fast, but he’s fast enough to hurt you. It’s going to be a test to see if we can hold them in check.”
“Great backs and big lines are nothing new to Americus, especially in the last two games,” the article continued. “The Panthers have only given up 46 rushing yards since halftime of the Randolph-Clay game on Sept. 29. The primary reason being the dominant play of the Americus defensive line, led by seniors Marcus Campbell, Eddie Sims and Tim Angrish.”
At the time, the Turner squad was also notably the top team in Region 1-AA for fewest points allowed, but Soliday told the Times-Recorder that that didn’t bother him or the Panthers’ team members very much.
“We haven’t seen them against anybody who throws the ball yet,” said Soliday. “We can’t really get a good picture of their secondary. We’re hoping maybe that will be to our advantage.”
The Rebels would definitely get the chance to show whether or not they could hold off a passing attack, as Americus’ defensive line would be protecting Johnson, who had already broken the 1,100-yard marker through the air by that point in the season.
Soliday expressed his excitement as the article concluded, saying, “This, right now, is definitely a bigger game for us because this will put somebody in sole possession of first place… It should be a tremendous football game.” 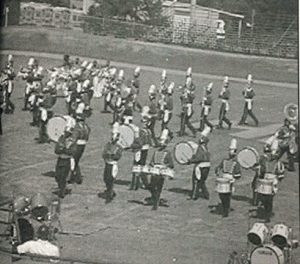