City has heavy agenda for Thursday 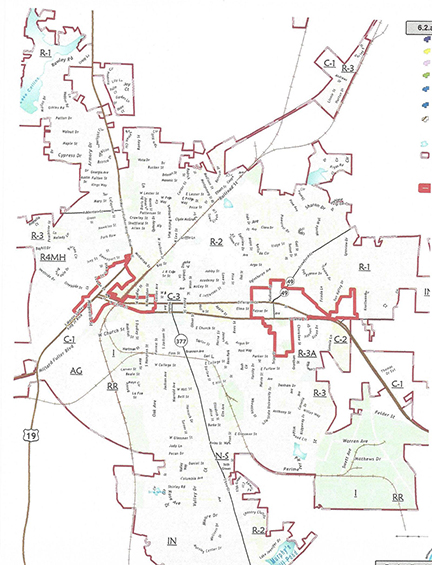 AMERICUS — The Americus Mayor and City Council have a lengthy agenda for Thursday’s regular meeting at 5 p.m. in the Council Chambers of the Russell Thomas Jr. Public Safety Building downtown.
Mayor Barry Blount will administer the oath of office to James Miles Jr., Mark Tyler, Krystle Hannibal and Paul Joiner who have recently been appointed to the Alcohol License Review Board.
A representative from the Department of Juvenile Justice has requested to speak about a new mentoring program.
One Sumter Foundation will provide a brief update.
Dash Patel has requested to speak concerning the new ordinance the city is trying to implement regarding new alcohol permits for employees. Wayne Bowers and Nirav Patel will also speak on the same subject
There will be a public hearing to receive public input on a request to annex 139 Parkers Mill Creek Road into the city. Josh Roth, planning and inspection director for the City of Americus, owns the property which is zoned R-1 residential. Roth informed the Council during its agenda setting session of July 13 that the Zoning Commission has reviewed the request and recommends annexation. He asked that Council waive the second reading and approve his request at Thursday’s meeting.
There will also be a public hearing to receive public comment concerning the adoption of an Entertainment Overlay Zoning District. Roth reported that a meeting was held on July 12 to hear from the public on the proposal and “everything was positive” and no issues were brought up. The district will allow for extended hours beyond the regular hours, but will have strict requirements for the businesses, such as interior sound proofing. He said the rules do not apply to existing businesses unless they change the lines of their buildings or change occupancy, such as from an office to a restaurant. Alcohol sales requirements in the district would mean all patrons out by 2:30 a.m. and business closed by 3 a.m. The two districts are on Tripp Street and on Martin Luther King Jr. Boulevard.
Council member Daryl Dowdell asked Roth why the new businesses will be required to sound proof. “You can’t allow them to disturb neighbors,” Roth answered. “We don’t want to make it difficult, but they must have some consideration.”
The Council will also vote on the following items.
• Kathryn Mournighan has applied for a catering license for Center Stage Market, 121 W. Forsyth St., to allow for sales of alcohol off premises.
• City Manager Steve Kennedy, in his updates, had Roth give a brief update on the old grocery store on South Jackson Street near the train depot that is being built there. Roth said a title search found the owner, Patrick Investment Corporation of Cordele, which is willing to sell the property for $30,500 minus the demolition cost of $25,867 (the lowest bid) which will also include removal of slab, foundation, asphalt and addition of seeding and straw. The City will also pay $900 earnest money as well as closing costs. Roth said they will need to have the property surveyed. The transaction will close within 30 days. The mayor advised they proceed with the matter after the survey. Council will vote on this Thursday.
• Consider awarding the bid for utility billing bill printing services to Arista Information Systems based on pricing, structure, experience and familiarity. City Finance Director, Diadra Powell told the mayor and Council the service will save about $30,000 and the City can insert information in the bills. Bills will also be able to be viewed and paid online. The cost of the service will be between $60,000 and $65,000 a year, according to Powell.
• Resolution authorizing RFP for an interactive voice response system (IVR).
• Consider approving the bid for street and storm drainage improvements for East Avenue in the amount of $496,375.02. Steve Kennedy said this is in the CDBG (Community Development Block Grant) area and the City’s portion of the cost is “small.”
• Consider approving staff to move forward with a traffic study and layout design for the next steps of the downtown streetscape project. Funding will be requested from an outside source. Main Street director, Patrick Kay, had briefed Council on this during the agenda setting meeting. He said this project is part of the RSVP (Renaissance Strategic Visioning Plan) which the City adopted several years ago. He said the traffic study will cost between $40,000 and $45,000. The plan will possibly include narrowing Lamar Street from three to two lanes from the top of the bridge off Martin Luther King Jr. Boulevard to Prince Street and change parking to diagonal rather than parallel. After the traffic survey, the City will be required to hold public meetings for citizen input. Kay said a design study will cost approximately $18,000.
• Council will also consider four appointments to the Hospital Authority: Fred McLaughlin, Robert Harvey, Ricky Arnold and Dwight Chavis.

Windsor to mark 125 years with gala