Georgia Sparks jump to 10-3 after third tourney in Louisville 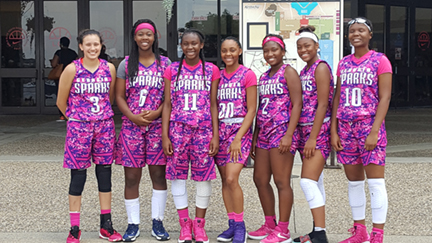 LOUISVILLE, Ky. – The Georgia Sparks Exposure Basketball Team traveled to Louisville, Kentucky from July 5-13 and competed in The Run 4 The Roses, Apache Memorial and Battle in the Boro Tournaments all held at the Kentucky Expo Center which had 66 courts under one roof.
The Sparks traveled with seven players and, with a couple of minor injuries, finished with only six healthy players. The Sparks played teams from Canada, New York, Boston, Pennsylvania, Florida, Virginia, and Texas on their way to a 10-3 record for the tournaments.
“This was a great opportunity for the girls to play top notch competition in front of lots of college coaches and college recruiting agencies because all events were in one building,” said Georgia Sparks coach, Rick Jones.
“My job is to make sure these girls learn the basics of basketball, play the best competition win or lose, and learn the game in order to be the best player they can be for their high school teams and coaches. I can truly say we are on our way,” he continued.
While in Kentucky the Sparks had the chance to visit the birth home of Muhammad Ali.
The Sparks have been practicing this week in preparation for the final college exposure tournament of the season at Suwanee Sports Academy in Suwanee, Ga.