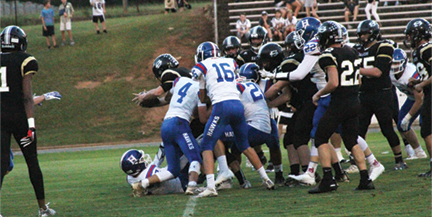 MICHAEL MURRAY I ATR: Southland Academy quarterback, Alex Roach, breaks the plane while dragging along several Heritage defenders during the first quarter of the Raiders’ Sept. 1 match-up against the Hawks in Americus.

Local football fans are in for some excitement this Friday night, as all three of the area teams in the ATR’s coverage area are coming off of non-conference wins, and will be striving to show their fans similarly exciting performances when they return to the field.
With four straight wins under their belts, the Southland Academy Raiders will be returning to action at Harvey Simpson Field in Americus to lay their undefeated record on the line once more in a tilt against the Terrell Academy Eagles.
The Class AA Eagles are currently 1-2 on the season, having defeated the Heritage School 27-20 in their second match-up of the year. This past week, the Raiders handily took down Heritage 50-0. The Eagles’ defeats have, so far, come at the hands of Brookwood and Deerfield-Windsor.
With a total of seven senior players and eight juniors on their roster, the Eagles will be looking to make a statement as they attempt to take home an upset in the road match against their old Raider rivals.
The Raiders, however, have come out very strong in their first four tilts of the season and will certainly be looking to ride this momentum into their match-ups against Terrell and Holy Spirit Prep (Sept. 16) in preparation to open Region 3-IAAA competition the following week.
With several players on the field with a ton of speed in front of them and a wealth of experience behind them, alongside the guidance of fourth-year head coach, Rod Murray, the Raiders stand a good chance of adding another hash-mark to the winning side of their tally this weekend.
The 1-1 Americus-Sumter High (ASHS) Panthers earned their first “W” of the season on Sept. 1 and will need every bit of grit that they can muster to take down a 3-0, Class AAAAAA Lee County squad this week.
To date, the Trojans have earned wins over Mary Persons, Hardaway, and Bainbridge.
Under the tutelage of veteran head coach, Dean Fabrizio, the Trojans have been on quite a tear for the better part of a decade, and will certainly be looking to continue their streak against the Panthers.
ASHS, however, has several weapons at their disposal, including wideouts AJ Payne and Kobe Lewis, alongside fellow seniors, Sage Finch and Braelin Williams (among many others), who each delivered exciting performances in the Panthers’ win over Dooly County last week. Look for junior quarterback, Kierston Harvey, and his teammates to buckle down and attempt to avoid common mistakes as they attempt to upset the Trojans on Friday. 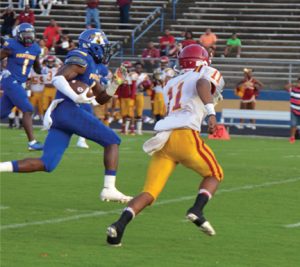 DONNELL SAMUEL:
ASHS senior, Kobe Lewis, blazes past a Dooly County defender during the first quarter of the Panthers’ Sept. 1 tilt against the Bobcats in Americus.

With a little luck and a lot of determination, head Coach, Erik Soliday and the Panthers stand a good chance of adding another victory to their tally before opening Region 1-AAAA competition against Westover on Sept. 15 in Albany.
After racking up a 1-1 record early this season, the Schley County Wildcats took a break last Friday in preparation for their upcoming home battle against Georgia Military College (2-1).
Coming off of a 28-6 thrashing of Calhoun County, the Wildcats should be carrying this enthusiasm for the game into this weekend’s match-up against the Bulldogs, whom Schley soundly defeated last season.
With head coach, Darren Alford, in his second year at the helm of the team, the Wildcats will probably continue to improve their performances on the field as the season progresses.
The ‘Cats will likely be leaning on the speed of their running backs, including James Baker, Alec Harris, and Tra Sampson (among many others), alongside sophomore quarterback, Garrett Peavey, to give them an edge and allow them to nab another win before they kick off Region 4-A competition on Sept. 15 against Hawkinsville.