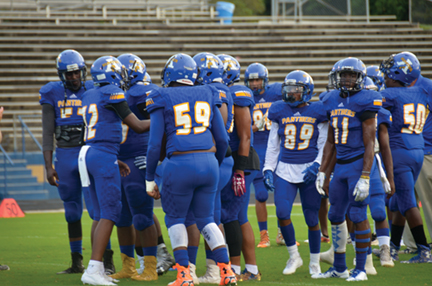 PHOTO BY CARLA CLADD: Several ASHS Panther team members take a break from the action during an early-season match-up in Americus.

ALBANY – The Americus High School Panthers opened Region 1-AAAA competition with a flourish on Sept. 15, traveling to Albany to test their skills against the Westover Patriots. The ASHS crew earned a 21-0 victory over their hosts, boosting their overall record to 2-2 on the 2017 season and elevating their region mark to 1-0.
With the defeat, the Patriots drop to 2-2, 0-1 in the region.
The Panthers came out strong early in the match after the Patriots opted to receive the initial kickoff.
Westover received the ball at their own 37 yard-line. On third down, the Patriots earned a first down at the 50, but a determined Panther defense held the hosts to three and out.
On the Patriots’ punt attempt from midfield, a high snap left the ball loose and the Panthers immediately jumped on it at the Westover 43.
From there, ASHS took off on a six-play, 44-yard drive highlighted by a long rush by running back, Kobe Lewis and a reception by wideout, Braelin Williams, that landed the ball at their opponents’ two-yard line.
From there, Lewis was able to take a handoff down the sideline for the Panthers’ first six-pointer of the game.
ASHS’ PAT attempt sailed wide, leaving the visitors up 6-0 five minutes into the game.
On the Patriots’ return drive, the determined Panther defense, once again, held the hosts to three and out to reclaim the ball at the 49-yard line.
The Patriots responded in kind, tightening up their defenses to hold the visitors to only four downs, despite a long keeper by ASHS quarterback, Kierston Harvey.
The Patriots then began to gain ground on their return, earning their second first down of the match. As the home team approached the Panthers’ red zone, ASHS’ Keunta Holley and Malcolm Mercer added tackles for loss to halt their progress and force them to punt to the 44 yard-line.
The Panthers added a pair of first downs in their responding drive, as Harvey and Lewis both added yardage on the ground. On third and nine, however, Lewis was dropped for a loss, forcing the Panthers to punt from their opponents’ 43.
A Patriot keeper kept the home side of the stands cheering but, on the following play, Holley managed to strip the ball from Westover’s running back, setting the Panthers up for another touchdown drive early in the second frame.
On first and 10 from the Westover 35, Harvey faked a jet sweep and pitched the ball to Lewis, who took off for the 25 yard-line. From there, Lewis took another handoff for a his second touchdown rush of the tilt.
ASHS opted to make up for lost ground with a two-point conversion attempt, which Lewis deftly ran in, leaving the Panthers up 14-0 with seven minutes left to play in the first half.
On Westover’s second play of their answering drive, a pass was picked off by ASHS’ Lemario Larry to retake possession. The Patriots returned the favor three plays later with an interception to begin a drive that would push the hosts deep into ASHS territory.
ASHS’ hard-nosed defense managed to pull off an exciting goal-line stand, however, refusing to allow the Patriots to break the plane from the one-yard line.
ASHS was then held to only four downs, with their punt returned to their own side of the field.
On Westover’s first play of the series, ASHS’ Jakhari White pulled down yet another interception to halt their progress as the first half ended.
When the teams returned from the halftime break, the Panthers took off on another campaign, highlighted by more hard rushes from Lewis and Mikal Douglas, as well as an apparent reception by wide receiver, AJ Payne, that was ruled out of bounds after consideration by the officials.
After punting to Westover’s 30, White showed off his skills again, intercepting a long bomb on the first play to return the ball to the Panthers.
The teams traded possession four more times over the next six minutes, with a Westover field goal attempt sailing wide left and ASHS’ Jakobe McCuller adding a tackle for loss before the Panthers would see the chance to strike again.
After the Patriot punter’s knee hit the ground while handling an errant snap, the visitors found themselves in the perfect position to further their advantage in the match.
On second and ten, from the Westover 38, Harvey zeroed in on Payne, who was wide open and took off for the end zone without being touched.
ASHS place kicker, Carlos Hernandez, then split the uprights to give the visitors a 21-0 edge that they would hang onto until the final buzzer.
ASHS will return to action on Sept. 22, hosting the Northside High School Patriots at Finklea-Robinson Field in Americus. The Panthers will extend their home stretch on Sept. 29 and Oct. 13, hosting the Cairo Syrupmakers and the Shaw Raiders, respectively.