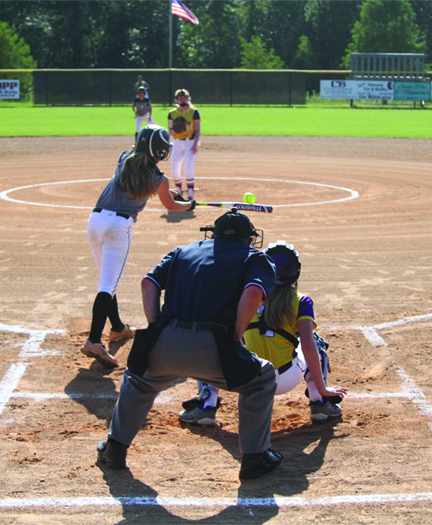 MICHAEL MURRAY I ATR: Schley County’s Emily Campbell connects with a pitch during an early season contest against Bleckley County in Ellaville.

The Schley County Lady Wildcats softball team been on quite a tear this season, on their quest to once again claim the Region 4-A title.
At this point in the season, the Lady Wildcats have amassed an impressive 10-5 record on the 2017 season. The Schley ladies are currently 6-2 in Region 4-A competition.
The Lady Wildcats opened this year’s campaign on Aug. 7 with a 9-4 defeat of the Emmanuel County Institute Bulldogs before kicking off region play against Crawford County with a 12-7 win the following day.
The Lady Wildcats took their first loss of the season on Aug. 10, dropping a 4-3 decision in a back-and-forth tilt against the Brookstone Lady Warriors. 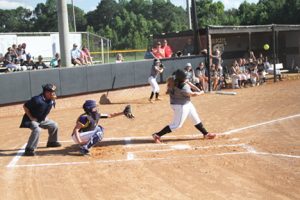 MICHAEL MURRAY I ATR:
Schley County’s Mindy Carol Register swings for the fences during an early season contest against Bleckley County in Ellaville.

The Lady ‘Cats returned to action with a vengeance on Aug. 16, besting Bleckley County 8-0 before facing the Perry High School Lady Panthers. The Schley girls took their second loss of the season in that match-up, dropping a 9-6 decision to the Lady Panthers.
Once again, the Lady Wildcats returned to the diamond in style, traveling to Manchester High to deal an 11-0 blow to the Lady Blue Devils on Aug. 24 before returning to their home field on Aug. 28 to battle Wilcox County. The Schley squad suffered a 2-1 defeat at the hands of the Lady Patriots and hit the road the following afternoon for Marion County to take on the Lady Eagles.
In a bitter, back-and-forth rivalry match-up, the Lady Wildcats lost the test 5-4 after a defensive battle that went into extra innings. 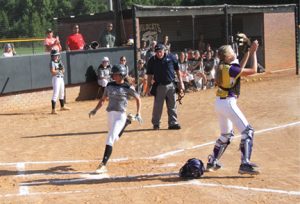 MICHAEL MURRAY I ATR:
Schley County’s Alexis Bradshaw adds a run to the Lady Wildcats’ victory over the Lady Royals during an early season contest against Bleckley County in Ellaville.

Following that defeat, the Schley crew tightened up their game in preparation for a doubleheader against the Dooly County Bobcats on Sept. 5.
The Lady ‘Cats solidly dispatched their visiting opponents, earning a 22-0 victory over the Lady Bobcats before delivering the coup de grace that afternoon with a 15-0 blowout of the visitors.
The following afternoon, the Schley ladies returned to Perry High School for a chance to even the score against the Lady Panthers. The Lady Wildcats did just that, utilizing a six-run first inning to pull ahead early and nab a one-sided 11-6 win over the Lady Panthers.
On Sept. 7, the Lady Wildcats continued their winning ways with a five-inning, 10-1 defeat of Crawford County in Roberta.
Upon returning to the diamond on Sept. 13, the Schley squad traveled to Macon for a doubleheader against the First Presbyterian Day School Lady Vikings.
The Lady Wildcats finished the day’s opener against the Lady Vikings with a 5-2 advantage over their hosts. In the afternoon’s closer, the Lady Vikings grabbed an early lead, which they carefully maintained throughout the tilt to defeat the Lady Wildcats 13-8.
The Lady Wildcats were scheduled to return to their home field on Sept. 14, but the games were postponed. No make-up date had been announced as of press time.
The Lady ‘Cats will be returning to action on Sept. 20, hitting the road for Cochran to battle the Bleckley County Lady Royals once more. The following afternoon, the Schley squad will head back to the field in Ellaville to take on the Manchester Lady Blue Devils again.