President Carter to be honored at GSW 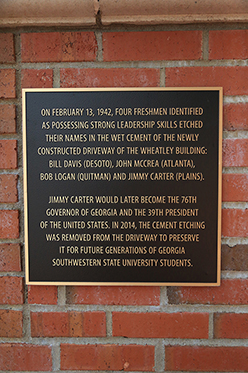 AMERICUS — Georgia Southwestern State University (GSW) is fortunate to count three of the most notable U.S. national figures as alumni: the late former U.S. Attorney General Griffin Bell, former first lady Rosalynn Carter and former President Jimmy Carter, who attended GSW in 1941-42.
In a special ceremony at 11 a.m. on Friday, Sept. 22, the University will be recognizing President Carter. The event will take place on the Wheatley Administration Building Lawn, where GSW will dedicate its new signature landmark — the “Presidential Plaza” — located at the main entrance to campus. The project was completed in late April 2017. 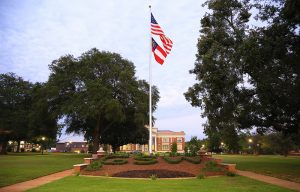 The west or front side of the plaza features a set of planted hedges that spell “GSW.” The east or plaza side includes a mounted hand-signature in cement from President Carter when he was a freshman at GSW in 1942. The plaque on site within the plaza says the following:
On February 13, 1942, four freshmen identified as possessing strong leadership skills etched their names in the wet cement of the newly constructed driveway of the Wheatley Building: Bill Davis (DeSoto), John McCrea (Atlanta), Bob Logan (Quitman) and Jimmy Carter (Plains). Jimmy Carter would later become the 76th Governor of Georgia and the 39th President of the United States. In 2014, the cement etching was removed from the driveway to preserve it for future generations of Georgia Southwestern State University students.

Both Jimmy and Rosalynn Carter will be in attendance, and he will be on the program.
The public is invited to attend this free event. For additional information, call (229) 931-2037 or email univrel@gsw.edu.