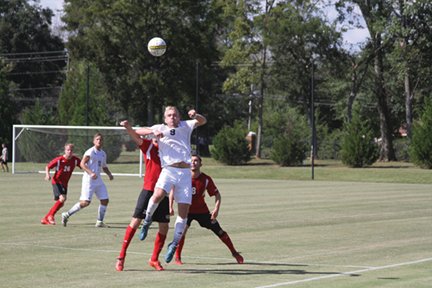 MICHAEL MURRAY I ATR: Gsw’s Dylan Marshall (9) delivers a header during the first half of the Hurricanes’ Sept. 27 home match-up against Flagler College.

AMERICUS – The Georgia Southwestern State University (GSW) men’s and women’s soccer teams hit the pitch in Americus on Sept. 27 to face Peach Belt Conference (PBC) opponent, Flagler College.
In the men’s match-up, Flagler scored three goals in the final 32 minutes, including a penalty kick with 2:01 to play, to rally from behind and hand the Hurricanes their fourth consecutive loss by a one goal differential, 3-2.
With the loss, the Hurricanes’ record falls to 3-4-1 overall, 0-2 in the PBC.
In women’s action, Flagler scored four first half goals to run past the Lady Hurricanes 4-0 in the PBC home opener.
The Hurricanes allowed their second goal this season to an opponent with essentially two minutes remaining in the match. Middle Georgia scored its equalizer against the GSW men with 1:58 left on Sept. 20.
To open the scoring, GSW’s Divin Moke took a long lead pass from Silvio Polly and beat the Saints keeper, Iwan Roberts, with a shot inside the lower right corner of the goal for his second score of the season. The Hurricanes took their 1-0 lead into the halftime break.
Flagler’s Oscar Davidsson poked in a rebound off a shot by Kyle Doherty in the 59th minute to even the match. 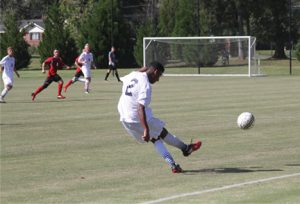 MICHAEL MURRAY I ATR:
GSW’s JP Merlet fires a pass down field to a teammate during the Hurricanes’ Sept. 27 home PBC match-up against the Flagler Saints.

Polly covered nearly half the field when he brought the ball across the halfway line and pulled up just inside the 18, spun to his left, set and drilled a shot that hit the inside of the cross bar and the right post for his fifth goal of the season. Polly’s shot in the 67th minute put GSW back on top, 2-1.
Graham Grassmyer found a deflected ball off a corner kick in the 79th minute to deliver the equalizer for Flagler and at the 87:59 mark, Rostand Ndong converted the penalty kick to pull out the win.
Flagler finished with a slim 16-14 advantage in shots and an 8-5 edge in corner kicks. Fouls were even at 7-7.
GSW goalkeeper Joshua Swift made five saves in the match. Roberts stopped six between the pipes for Flagler.
Up next, GSW travels to Mobile, Ala., on Sept. 30 for a match-up against Spring Hill College (3-3).
In the Lady ‘Canes’ tilt, Myiah Russack-Cradeur opened the scoring for the Saints in the 20th minute when she took a pass from Charlene Nowotny and put it past Lady Canes (0-6-0, 0-2-0 PBC) goalkeeper Sammie Conley. Russack-Cradeur added her second goal of the day and sixth on the season eight minutes later after MC Bell found her open in front of the net to give Flagler a two-goal advantage.
The Saints (7-0-1, 2-0-1 PBC) added their third score just 35 seconds later on a goal from Fio Fustagno and rounded out the scoring in the 35th minute when Nowotny found the back of the net with her sixth of the season.
Bri Reda was able to tally the lone Georgia Southwestern shot on the afternoon as the Lady Canes were outshot 28-1 by the Saints. Flagler also enjoyed a 9-1 advantage in corner kicks.
GSW junior goalkeeper Sammie Conley made eight saves on the 12 shots on goal for the Saints, including five in the first half.
Up next, the Lady Hurricanes are back on the road for a PBC game at UNC Pembroke on Sept. 30.