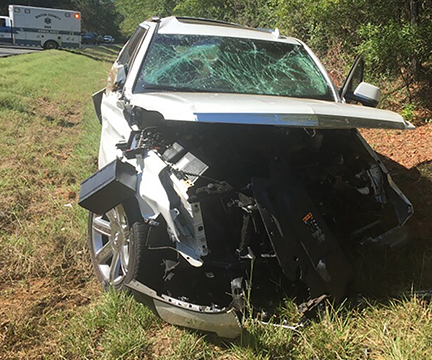 AMERICUS — A four-vehicle traffic accident in Macon County Thursday fortunately claimed no lives, and an Americus woman sustained non-life-threatening injuries.
Sgt. Craig Smith, assistant Post commander of Georgia State Patrol Post 15, Perry, related how the accident occurred around 11:30 a.m. Thursday on Ga. Highway 224, just west of Hammond Road in Macon County.
A Dodge pickup truck, driven by Wayne Rohrbaugh, 56, of Montezuma, was traveling east, pulling a utility trailer behind it.
Traveling west was a Cadillac Escalade SUV driven by Lisa Hancock, 56, of Americus.
The state trooper said the axle on the utility trailer broke and the trailer traveled into the westbound lane where it was struck by the Escalade. After impact, the Escaladed left the roadway and came to rest on the north shoulder.
Meanwhile, a Nissan Pathfinder SUV, driven by Robin Drake, 58, of Loganville, was traveling behind the Escalade, also traveling west. The Pathfinder also struck the trailer and came to rest on the south shoulder of the roadway.
The fourth vehicle involved, an Acura sedan driven by Yolanda English, 43, of Montezuma, was traveling east behind the Dodge pickup pulling the trailer. After the trailer was struck by the Escalade and the Pathfinder, the trailer rolled back into the front of the Acura.
The only injury was to Hancock, who was air evacuated to Navicent in Macon for treatment. She sustained a concussion and cuts and bruises and was held overnight for observation.
The trooper said there were no charges in the crash.