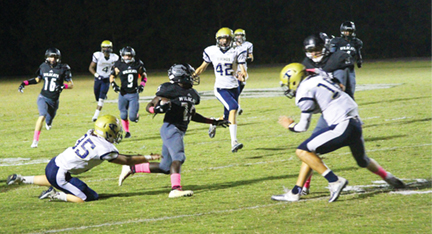 MICHAEL MURRAY I ATR: Schley’s Ja’myron Clayton dodges several Viking defenders on his way to the end zone during the third quarter of the Wildcats’ Oct. 6 home game against Taylor County.

ELLAVILLE – The full moon hanging over the night sky on the evening of Oct. 6 gave a stadium full of fans the perfect view as the Schley County High School Wildcats put up quite a fight against the Taylor County Vikings in a Region 4-A match-up in Ellaville.
After a hard-fought, back-and-forth battle, the Schley squad suffered a 31-28 defeat at the hands of the Vikings, dropping the Wildcats’ overall mark to 4-2 on the 2017 season. The Wildcats are currently 2-1 in region competition.
The Wildcats got the ball rolling early in the tilt. After stalling the Vikings’ opening drive, the Schley squad steadily pushed their way down the field into their opponents’ red one.
A completion between quarterback, Garrett Peavey to Ja’Myron Clayton put the Wildcats within striking distance and James Baker punched in the game’s first six-pointer from the three yard-line.
Schley place kicker, William Blackwell, deftly split the uprights with 10:17 remaining in the first quarter to give the hosts an early 7-0 edge.
A hard defensive push from the Wildcats, headed up by a series of jarring stops by Tra Sampson, Derric Tatum, Dartavious Napper, and Alec Harris prevented the Vikings from making a comeback on their return drive and forced the visitors to punt from near midfield.
The Wildcats received the ball at their own seven and began making their way down the field on a drive highlighted by a series of rushes from Calvin Sims, Daniel Reese, Sampson, and Baker.
The 15-play drive was halted, however, near the Viking 30-yard line, as the visitors earned a turnover on downs.
The Vikings followed with a set of completions to cover plenty of ground quickly on a drive that was slowed by the efforts of Schley’s Wayde Montgomery and Sampson. On third and six from the 10-yard line, however, a Taylor wideout, Tre’ci Boyington pulled in a touchdown pass to narrow the gap to 7-6 with 9:25 remaining in the first half.
The teams traded possession once more before the Taylor County crew hit the scoreboard again despite the defensive efforts of Schley’s Trent Bivins, Tatum, Napper, and Harris, who added tackles to their stats on the drive.
With five minutes remaining in the half, Taylor’s Jackson Knight brought down another touchdown pass to put the visitors ahead. Taylor’s two-point conversion attempt was halted by the Wildcats, leaving the score 12-7, where it would stay until the halftime buzzer.
The Vikings then recovered an on-side kick on their return and pressed their way deep into Wildcat territory.
An exciting goal-line stand propelled by a host of Wildcat defenders and the accompanying the roar of the home crowd kept the Vikings from adding to their advantage before the half ended.
The ‘Cats received the opening kickoff of the second half, but were held to only seven downs before relinquishing the ball.
Thje Schley squad responded by holding the visitors to three and out, forcing a punt which Clayton returned nearly 60 yards for the Wildcats’ second touchdown of the game. Blackwell’s PAT attempt, once again, sailed true, putting the hosts back on top 14-12 three minutes into the second half.
The Vikings then took off on a 14-play drive that ended with another touchdown pass to Knight and ate up nearly six minutes of clock time.
Taylor’s two-point shot was, once again, stopped by a hard tackle from Napper, holding the visitors’ lead to 18-14.
Less than a minute later, Peavey once again connected with Clayton, who broke several tackle attempts for a 58-yard touchdown pass and Blackwell added his third accurate PAT kick of the game to put the ‘Cats back on top 21-18.
Unwilling to give up, the Vikings answered with an eight-play push that ended in another touchdown from the two-yard line. This time around, the visitors’ extra point kick split the uprights, giving the Vikings a 25-21 edge less than three minutes into the final frame.
Schley was held to only six downs on their return but, upon turning the ball over to the visitors, the home team caused a fumble and immediately jumped on it to regain possession in even better field position.
From midfield, the Wildcats utilized a series of rushes by Sims to land the ball at their opponents’ three. From there, Sims completed the journey to put Schley ahead once more, 27-25.
Blackwell then hit his final PAT of the game to bring the Schley total to 28 points.
The visitors weren’t finished, however. On the first play after the return kickoff, Knight brought in one final long bomb to add another six-pointer to the Vikings’ tally. Taylor’s PAT attempt was blocked by Napper and, with just over two minutes left in the game, the Wildcats were within three points of tying the score 31-28.
The Wildcats made their way down the field, with Peavey connecting with Clayton and Daniel Reese along the way to push the ball to the 17.
Time was not on their side, however, and the drive ended with the final buzzer.
The Wildcats are scheduled to return to action on Oct. 13, traveling to Montezuma to take on the Macon County Bulldogs.

Raiders jump to 8-1 with win over Valwood