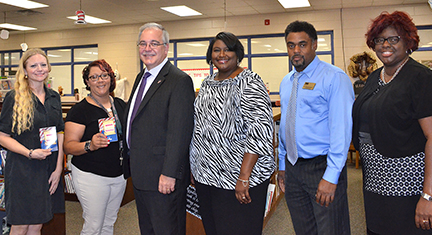 AMERICUS — Sumter County Schools Superintendent Torrance Choates, Ed.D., and Sumter County Intermediate School Principal Renee Mays, Ed.D., welcomed State School Superintendent Richard Woods to the school earlier this week.
They met with students from Hollie Walters’ and Lara Lloyd’s fourth-grade classes in the school’s media center. Woods told the students that he loves children, and students and teachers were his passion. He was honored to be able to give the Constitution booklet, “The Words that Built America” to all the fourth-graders. Woods encouraged the students to take the booklet all the way through school. He asked the students about The Constitution and Declaration of Independence and encouraged them to use the booklet as a learning tool, to learn as much as they can about our Constitution and founding documents. They would be able to use it as a resource in fourth, fifth, eighth grades and in high school when they study American history and government.
He opened the floor for questions. Brandon Brown, a fourth-grade student in Lloyd’s class,  asked, “How did you become the superintendent of Georgia?” Woods used this as a teaching moment and explained how he is a state Constitutional Officer, which means that he is an elected official. Rocquel Joseph, fourth-grade student in Walters’ class asked, “What made you want to become Georgia’s superintendent?” Woods explained he began his career as a high school social studies teacher and has been in education for 25 years. “I love young people, and seeing the doors of opportunity open. Seeing every one of you graduate in 2026, from a Georgia high school is my passion.”