Raye Holt faces each day with attitude – a good one 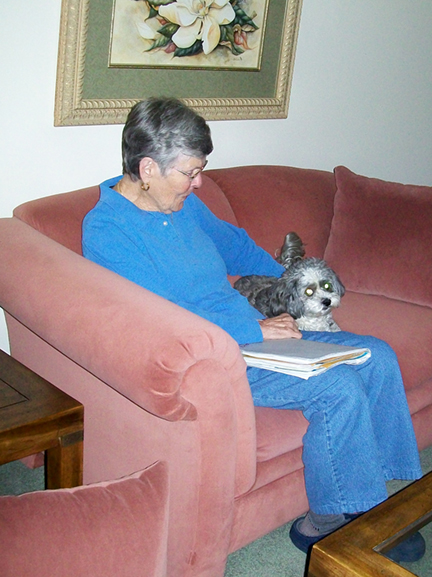 AMERICUS — When Raye Holt, Ed.D., retired in 1996, she had no immediate plans to return home to Americus. Living in Beaumont, Texas, where she had been professor of health and physical education at Lamar College, she had a full life. She could return home occasionally and then continue the same pleasant path she was enjoying. However, in 1997, she began to feel the need to be closer to her parents, who were aging — gracefully, but aging, all the same. So, she moved back home, and a new phase of her life would begin. She needed to check on her parents with regularity, spend time with them, begin to care for them in small ways.
Then in 1999, Holt was diagnosed with colon cancer. Detected early, it was treated with surgery, in Albany, and she was considered cured. But recovery took some time, and her mother understood that she needed to be free from any concern about them. “We’re moving to Perfect Care till you recuperate,” she said, and Holt indicated that she did not argue with her mother. “The strength that I have had, I learned from my mother. She was independent when it wasn’t kosher to be that way.” Her father died suddenly while they were living there, leaving her mother alone. So Holt asked her mother to move in with her.
For several years, life went along smoothly. Then one morning in 2005, Holt rolled out of bed with a terrible pain in her right armpit. “I felt a lump,” she said, and went straight to her internist. Though it could be an infected lymph node, the doctor ran tests: mammogram and CT scan, and everything seemed normal. But it didn’t go away. Time passed, and a few months later, Dr. Douglas Joyner performed a biopsy. On the morning of Sept. 28, he called with the news: It was malignant. Joyner had already set up an appointment with Dr. Chirag Jani, the cancer specialist at Phoebe Putney Memorial Hospital in Albany (who at the time was making weekly visits to Sumter Regional Hospital on Forsyth Street). Three of the six lymph nodes that were removed were cancerous. And, they reported, the tissue was compatible with breast cancer. Holt prepared for surgery, with Dr. O.B. Carter Jr., at Phoebe Putney, the same physician who had performed the colon surgery several years earlier. She underwent a modified radical mastectomy and came home to heal before starting the follow-up treatment. This was 2005, so the old hospital was still the place where most of the chemotherapy took place. “It [the treatment] was the pits,” she said. But she added, “It wasn’t nearly as bad for me as it is for some folks — maybe because I followed all instructions to the T.” Next came radiation therapy. She had 34 radiation treatments, and the final protocol was the drug Herceptin, which she took following radiation. There is a caveat in all the treatment: a tumor was not found in the breast. But the underarm tumors, they had reported, were “compatible’” with breast cancer. An intelligent woman who weighs the odds, she accepts this.
Holt smiled as she recalled the Lights of Love bus from Phoebe Putney that picked her up at 8 a.m. and had her back home by noon. And she praised all the staff who were on duty when she arrived and when she had treatment. “There were always smiles, and words of encouragement,” she said. No one ever had a long, sad face, or bad attitude; they were all encouraging and cheering patients on toward a full life when treatment was completed. One of her greeting cards from a receptionist at Phoebe says “Congratulations! Move on with life.” And she does. But she does not forget all the kindnesses. She has kept a record of every greeting, every note she received. She is thankful.
While all this was going on in Holt’s life, her mother had weakened. Someone was employed to come and stay with her half a day, until eventually, she moved to a personal care home, where she completed a long and eventful life at the age of 101. Holt is thankful for the time they shared in her suburban home, a lovely place with reminders of her mother all around. She lives alone now, has many friends, and a full life — and an adorable peekapoo named Reesey. She is involved at Calvary Episcopal Church, where she serves on the Altar Guild and works in its Mustard Seed Ministry. “Being at Calvary has been one of the most important blessings I’ve ever had,” she says with a smile. Then she shares a quote from St. Francis de Sales that a friend sent following her surgery:
Do not look forward to what may happen tomorrow; the same Everlasting Father who cares for you today will take care of you tomorrow and every day. Either life will shield you from suffering, or He will give you unfailing strength to bear it.”
One gets the sense that Raye Holt will have the “unfailing strength” to bear whatever life brings.  In the meantime, she said, life not only goes on: life is good. She lives it to the fullest every day.