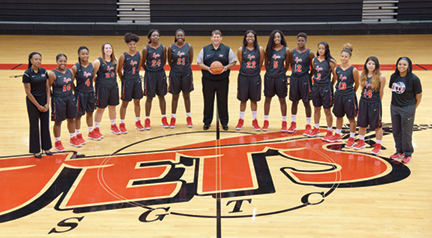 The South Georgia Technical College (SGTC) Lady Jets 2017-18 women’s intercollegiate basketball team is ranked 13th in the country among National Junior College Athletic Association (NJCAA) Division I teams, according to the NJCAA’s DI Women’s preseason poll. SGTC is the only Georgia team included in the top-25 preseason standings.
“Obviously, we are very pleased to be included in the NJCAA preseason poll,” said SGTC athletic director and Lady Jets head coach James Frey. “However, this is a pre-season poll. We have not played a regulation game yet, so we will just have to wait and see if we can put it all together and find the right combination to end the season with a number 16 or higher ranking. This poll is a compliment to what we did last season and an expectation for the coming year. We have some big shoes to fill but I believe if we work together, we can be in the hunt again this season.”
The Lady Jets posted a 30-5 overall record (13-1 conference) in the 2016-17 season and ended the season ranked No. 16 nationally. The team made it to the Sweet 16 round of the NJCAA National Women’s Basketball Championship in Lubbock, Texas, but fell to Odessa College by a final of 58 to 44. Odessa College from Texas is ranked 10th in the pre-season poll.
The Lady Jets have four players returning from the 2016-17 season that saw the team capture the Georgia Collegiate Athletic Association (GCAA) regular season title, the NJCAA Region XVII Tournament championship as well as the District J Tournament title to earn their fourth trip to the NJCAA Division I National Tournament. This was the third trip to the National Tournament for Frey and Assistant Coach Kenzia Conyers.
The returning players include: Small Forward Houlfat Mahouchiza (5) from Nice, France; Point Guard Kanna Suzuki (14) from Hamamatsu, Japan; Center Sceret Ethridge (22) from Argyle, Ga.; and Power Forward Esther Adenike (24) from Lagos, Nigeria.
Suzuki was named GCAA Freshman of the Year for the 2016-17 season and Adenike was named to the NJCAA Region 17 All-Tournament Team. Frey also was named the GCAA Coach of the Year.
The Lady Jets will begin the regular season on Nov. 4, when they host the Lady Jets Tip-Off Classic in The Hangar on SGTC campus in Americus.
For more information about the Jets and Lady Jets basketball teams, schedules and to stay up to date on the 2017-2018 season, visit: https://www.southgatech.edu/athletics/